(CNN) -- A chemistry professor at Harvard University is trying to shrink a medical laboratory onto a piece of paper that's the size of a fingerprint and costs about a penny.

George Whitesides has developed a prototype for paper "chip" technology that could be used in the developing world to cheaply diagnose deadly diseases such as HIV, malaria, tuberculosis, hepatitis and gastroenteritis.

The first products will be available in about a year, he said.

His efforts, which find their inspiration from the simple designs of comic books and computer chips, are surprisingly low-tech and cheap.

Patients put a drop of blood on one side of the slip of paper, and on the other appears a colorful pattern in the shape of a tree, which tells medical professionals whether the person is infected with certain diseases.

Water-repellent comic-book ink saturates several layers of paper, he said. The ink funnels a patient's blood into tree-like channels, where several layers of treated paper react with the blood to create diagnostic colors.

It's not entirely unlike a home pregnancy test, Whitesides said, but the chips are much smaller and cheaper, and they test for multiple diseases at once. They also show how severely a person is infected rather than producing only a positive-negative reading. 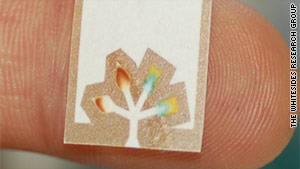 This pattern could tell medical professionals whether a person is infected with certain diseases.

The paper chips are expected to be used in concert with mobile phones, which are exploding in popularity in the developing world.

Since people in remote parts of Africa and Asia often have to travel great distances by public transit or foot to reach a medical clinic, patients simply can take photos of the chips with cell phones and then send them to larger cities for diagnosis. And Whitesides said his group is also working with a cell phone maker to develop apps that would tell patients the results of their tests automatically if doctors aren't available.

"Doctors are as scarce a resource as money is," he said.

The tests may also be useful for highly contagious diseases such as hepatitis C, which require sick people to be quarantined to prevent further infection.

Whitesides' work, if successful, will bolster the argument that solutions to complicated problems often are found in simple, low-cost technologies.

From consumer electronics to medical equipment, a growing number of people seem to be searching for technologies that are cheap, reliable and even somewhat retro. Computer operating systems are being stripped of new features in favor of a simplified experience; basic devices such as the Flip cam seem more chic and popular than high-end video equipment.

The spiking costs of health care in the U.S. put pressure on doctors to perform expensive tests with high-end equipment only when necessary. And in the developing world, the medical community has realized there's not always electricity to power and doctors to manage high-tech medical clinics with rooms full of electronics and labs.

Cheap and reliable health care technologies are what the developing world and the Western world need, said Dr. Gaby Vercauteren, coordinator of diagnostics and laboratory technologies at the World Health Organization.

"Obviously smaller, easy to use, inexpensive technologies will find their way throughout the whole system and will provide better access to care to all those who need it," she said.

She said many medical diagnostic tests are too expensive for people in poorer areas of the world to afford. But they are the essential first step to health care.

"Today, many people don't get the necessary diagnosis that will lead to access to the right treatment because diagnostic tests and lab tests are, most of the time, out of pocket," she said. "People don't have the money to buy that. Therefore, often, diseases are not diagnosed or only diagnosed far too late."

Keith Herold, an associate professor of bioengineering at the University of Maryland, said Whitesides' ideas build on a branch of science that's trying to develop "lab-on-chip" technologies, which use credit-card size devices to perform laboratory analyses.

Whitesides' paper chips are much simpler than other lab-on-chip projects, many of which require intricate production methods and heavier materials such as glass and plastic. But simpler might be better in this case, he said.

"I think it's real. It can be very useful, but it's not the fanciest manifestation of lab on a chip by any means," he said. "If it works and it's cheap, it's good for everybody."

Still, Whitesides' paper tests could run into some pitfalls.

Vercauteren, of the WHO, said the paper may mold in humid, hot climates. And it's still important for people to get access to doctors so they know what to do about their diagnoses, she said.

She said its possible to conquer those challenges.

The first test, Whitesides said, will be designed to detect liver function, which is important for people with HIV and who are on some strong medications.