Part of complete coverage on
South By Southwest 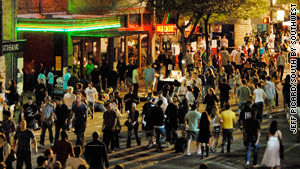 New York (CNN) -- On Friday, the major movers in the tech industry will gather in Austin, Texas, for the annual South by Southwest Interactive Conference.

Mobile service provider AT&T is working to ensure attendees won't face the flaky service they experienced last year when a convergence of thousands of smartphone users strained the company's wireless network to the point of breakage.

After several days of dropped calls and spotty service at last year's event -- not to mention bad publicity from the many bloggers in attendance -- AT&T was forced to add wireless capacities in downtown Austin to deal with the problem.

"The demand we saw on our network during South by Southwest was unprecedented," AT&T spokesman Mark Siegel said.

This year, AT&T, which is the exclusive mobile service provider for Apple's iPhone, is implementing a new system for the five-day event, which ends March 16.

AT&T says it added temporary cell sites in areas expected to experience high call traffic. The provider also updated software to expand network capacity and will send a team of network engineers to monitor the service 24 hours a day.

The conference is known for debuting some of the world's hippest Web sites, including Twitter and Foursquare.

"We've learned from last year, and we've taken very strong steps to help people have a better experience this year," Siegel said, noting that AT&T has seen 5,000 percent growth in mobile data traffic over the past three years. That's likely due to a surge in the iPhone's popularity.

TechCrunch's Siegler, who attended SXSW last year, said, "From my understanding, AT&T was simply crushed under the weight of how many iPhones there were at the conference. The problem seemed to be that iPhone users were using much more of the data pipeline than AT&T was used to in Austin, and they were unprepared."

According to Josh Williams, founder of location-based networking service Gowalla, the lack of wireless service at the conference had ramifications for many tech companies. Gowalla, like other social networking services, relies heavily on cell phone and wireless use.

"It rained on the parade of many mobile application companies launching products at SXSW [last year]," Williams said. "It was difficult to go to a SXSW-related event in 2009 where the poor network quality was not a constant topic of discussion."

This year, AT&T hopes to change that.

CNN will have complete coverage of the 2010 South by Southwest Interactive Conference at www.cnn.com/TECH and @cnntech on Twitter.