By Malcolm Grimston, for CNN 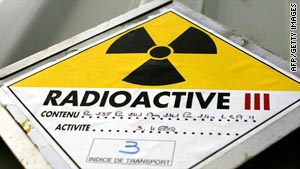 Malcolm Grimston is an associate fellow at Chatham House, a UK-based NGO analyzing international affairs and issues. Here he gives the case for nuclear energy.

London, England (CNN) -- We need three things from global energy and electricity supplies. They should be as economic as possible, as reliable as possible -- power cuts are very expensive -- and do as little damage to the environment as possible.

The challenge for energy policy, of course, is that often these three requirements pull us in different directions. The 1990s (especially in the UK) was extremely unusual in that a single policy -- the "dash for gas" -- was delivering on the economic, security and environmental fronts. Gas was cheap and plentiful and a lot of new generating capacity was built.

Now, however, the world is in trouble on all three fronts. Oil is hovering at around $80 a barrel dragging gas, coal and electricity prices up with it.

Security of supply is threatened in two ways. The main gas (and oil) reserves are in the Middle East and countries of the former Soviet Union -- not necessarily the most reliable suppliers for the long term. Many countries are also becoming alarmingly short of electricity generating capacity.

Meanwhile, despite growing fears of climate change the world is using a lot more energy and getting more of it from the main sources of greenhouse gas emissions -- oil, gas and coal -- than it did at the time of the supposedly groundbreaking Rio Conference in 1992.

As countries like China and India develop their economies world energy use is expected to double by 2050. Yet we have to cut releases of "greenhouse gases" like carbon dioxide by perhaps four-fifths over the same period if we are to stand a chance of managing the consequences.

It's impossible to believe there is a single simple solution to all of this. We need to use energy as efficiently as possible. We need to look for ways of capturing the carbon dioxide from coal and gas-fired power stations. We also need to use more renewables where they are technically feasible.

Its economics are probably favorable against any realistic assumption about fossil fuel prices in the future.

It does depend on the industry being able to deliver new stations to time and cost -- the experience in Finland and France, where the world's first nuclear reactors of the design known as the EPR are being built, is typical of the first-of-a-kind of any major technology, running seriously late and at much higher cost than first claimed, but that does not imply that future plants will follow the same pattern, assuming a sensible regulatory regime can be established.

But that of course is a matter for the commercial companies that will consider building them.

The fuel, uranium, is widespread -- countries like Canada and Australia are major producers. Unlike renewables, it does not depend on the wind blowing at the right speed, or the tide being in or the sun being out.

Indeed, for "baseload" -- the reliable electricity that we need for transportation, pumping water, keeping us warm (or cool) and so on -- nuclear energy does not compete with renewables but with coal and gas.

What do you think? Is nuclear power a good option? Send your comments using the "Sound off" box at the bottom of the page.

Is it perfect? No. Are its problems (notably radioactive waste) minor compared to energy shortages and climate change? In my view, resoundingly yes.

Nuclear energy should either be included in mechanisms for supporting low-carbon energy, such as the European renewables targets, or such measures should be abolished.

Only then would decisions on how most efficiently we can cut carbon emissions be taken on rational grounds rather than in deference to the hobby-horses of pressure groups.

Latest polls suggest that only 26 percent of people in the UK are convinced that climate change is real and caused by human activity.

Yet some self-styled environmentalists would rather divert their campaigning efforts to attack nuclear energy, which in reality has been very environmentally benign over the last 55 years when the "what-ifs" are ignored, than to establishing a public basis for action against what is in reality the greatest environmental threat we have ever faced or are likely to face. It is a warped sense of priorities of the most irresponsible kind.

At present we get about seven eighths of the world's traded energy from oil, coal and gas. The rest is almost evenly divided between nuclear and hydro. "New" renewables make very little contribution.

According to some commentators, mankind perversely chose to use all the bad sources of energy first, and kept the nice easy ones till last. It might be true but it almost certainly isn't. Nuclear (and hydro) are proven non-fossil low-carbon energy sources. To turn our backs on them now is sheer folly.

Coming soon: The case against nuclear energy. In the meantime let us know your thoughts in the "Sound off" box, below.