Why games will take over our lives 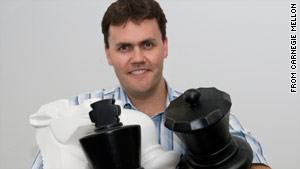 Jesse Schell is a game designer and professor at Carnegie Mellon University.

(CNN) -- If you think an electric toothbrush is high-tech, wait until you hear about the Internet-enabled version.

The point? If the entire Internet knows how often you brush your teeth and for how long, there's an incentive to brush more often.

Toothbrush makers could offer rewards for frequent brushers, too. Say you brush your teeth twice each day for three months. A company like Crest or Procter & Gamble could reward you with coupons for more toothbrushes, since your well-used bristles would probably be frayed by then.

Schell says dental hygiene -- and, really, just about everything else -- will become a game. He thinks the "gamepocalypse," the moment when everything in our lives becomes a game, is coming soon -- if it's not already here.

The Web-connected toothbrush is just one example Schell touched on during a recent interview. Here's an edited transcript:

CNN: You've said games are showing up all over the place. What do you mean by that, exactly?

In short, we already see games creeping into our everyday lives in all kinds of funny ways. You go to Starbucks, and you get points if you have a Starbucks card. And, in fact, they have a whole leveling system. The more times you visit, the more you move from level green up to gold level, with special privileges and free soy milk.

Already, we have this whole system of economies floating around out there. And at the same time, we have all these technologies showing up that are allowing us to track new things, things that we couldn't do before.

CNN: What are we tracking now that we couldn't before?

A new example that's kind of a popular one is this new game Foursquare, which is a game that works off of the GPS in your phone.

We normally think, 'Oh, the GPS in my phone is useful in case I need to get directions to somewhere.' But there's no reason that your GPS can't track your location all the time. And, in fact, why not make a game of it?

So in the world of Foursquare, you get territory points based on all the places you visit. If you are the person who visits a place more than anyone else, you can become the mayor of that place, unless someone else visits it more than you, and then they take over the mayorship of the place.

New video gaming systems are coming out that track every joint of your body. It's basically going to become a normal thing for us to allow Microsoft to put a three-dimensional camera on top of your television set looking at you, which sounds like a Big Brother scenario if ever I heard one, but, still, it's what we're going to allow.

CNN: Do you think this will go so far that we'll be living a game?

I think people will find a great deal of their lives co-opted by games, sort of like how we saw advertising co-opt huge amounts of our lives in the 20th century.

CNN: Has it already happened?

I jokingly call this convergence of games into reality the "Gamepocalypse": the moment when every moment of life is actually a game. So many people have been interested in the topic that I made a blog called Gamepocalypse Now.

Do you know about this Green Goose product that you snap onto your bicycle and it tracks how much you ride ... and it has a system of rewards based on how much gas you save?

There's a lot of these things that are starting to happen now, and I think we're going to see more and more of them coming together.

CNN: What's going to happen next?

I think camera-based technology and tracking is going to be one of the things, in the next 10 years, we're going to see a lot of evolution in.

You've got Google Goggles, where you take a picture of like anything, and it will tell you what it is. We haven't really started to make games with that yet, but I think we will start to.

And if you look at the new Nintendo DSi, which is their newest handheld, it has two cameras on it, which at first seemed kind of crazy to people, but the idea is you have one camera that faces out into the world and one that faces you the user, so it can look at your face and study your face.

No one's quite figured out exactly what that's for yet.

CNN: What do you think it's for?

I presume they want to go toward some facial tracking. They want to have games that involve tracking your face.

I think one of the things we'll start to see is common is, massively multiplayer online games like World of Warcraft will start to have a camera on your face, and then they'll map your facial expression to your avatar.

That's technologically not very difficult, and I think the potential for meaningful emotional expression and communication is significant there.

CNN: Will that change our everyday lives?

Anybody who has a product that can sense that the product is being used ... they're going to want to create motivations for you to use the product.

So fundamentally, they're going to make games out of it, because games are reward-based systems that motivate us to do things.

In fact, Oral-B is like halfway there. They already have a toothbrush that senses when you're brushing your teeth. And every 30 seconds, it beeps, meaning it's time now to change to a different corner of your mouth. So you do the four quadrants of your mouth, and when you've done all four, then it does a little special beep, and a happy face appears. And you don't get the happy face, you get a sad face, if you don't finishing brushing your teeth properly.

Now, that doesn't connect to the Internet yet, but, you know, it's about five seconds from connecting to the Internet. They already have a bathroom scale that uses Wi-Fi and connects to the Internet, so that every time you weigh yourself, it uploads it to a database so you can track your weight over time. You can configure it to automatically tweet your weight, in case you want that.

CNN: Is that supposed to be fun, or beneficial, for the consumer?

That sounds health-giving. But if you look at people who make soda pop, they're going to try to incentivize you to do things that are less healthy. I hate to think about the systems the cigarette companies are going to come up with in order to incentivize people.

CNN: Do you see a downside to people being watched and tracked all the time?

We all have choices to make about what aspects of our privacy we want to give away. We're already making choices like that all the time.

Anybody who uses Gmail has decided, "Yeah, I think it's OK for a major corporation to carefully sniff through every word of every e-mail I send and try to automatically come up with a profile of what sorts of things I might want to buy and then pop up distracting messages, specifically designed to distract me, based on my interests, on the side of the page."

Is it OK for Amazon to know every word of every book you've read? Are you comfortable with that? Maybe you are. Is it OK to let everybody know you eat Corn Flakes? OK, but then there are certain products you might not want people to know that you're using. ...

The part that I worry about the most is sort of the perverse incentives that these systems are going to try to create. Largely, the companies won't be caring about our health and welfare. They're going to be caring about, "Can I manipulate you into doing things that help the company?"

CNN: Should we create regulations to keep that from happening?

CNN: Why are we attracted to games?

One of the main things that's appealing about games is that you know a game can be won. It's an unusual game that's impossible to win.

The game presents you with challenges that can be met, and then it congratulates you on your successes at those challenges. It's a thing we don't get everyday in life.