Can coal clean up its act? 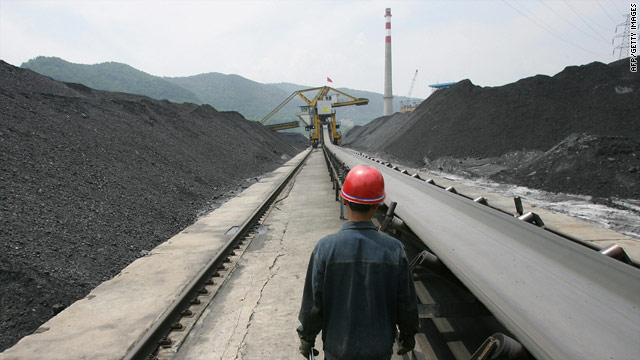 Coal is dirty, but it's cheap. Can new technology help turn this abundant energy supply into a clean and economically viable fuel?
STORY HIGHLIGHTS
RELATED TOPICS

London, England (CNN) -- It is one of the most abundant natural resources, providing around a quarter of the world's total energy and powering over 40 percent of our electricity supplies.

But it's also one of the dirtiest with the world's 2,300 coal-fired power stations contributing around 40 percent of all man-made emissions, according to the World Coal Institute. Their continued use enrages many environmentalists who argue that we should be phasing coal out.

But the coal industry is pinning its hopes on the rather oxymoronic-sounding "clean coal," which has become the umbrella term for a range of new technologies that share the aim of cleaning up coal in the 21st century.

Earth's Frontiers takes a look at the options:

Video: The greenest barrel of oil

According to the UK's Scottish Center for Carbon Storage(SCCS), this method -- provided it is used in tandem with CO2 storage -- has the potential to create almost emission-free fuel.

Integrated Gasification Combined Cycle (IGCC) -- as it is commonly known -- involves capturing CO2 in three stages. Firstly, the coal (a hydrocarbon fuel) is converted into hydrogen and carbon monoxide (CO) to form a synthesis gas. The CO is then converted into CO2 by reacting it with water before the CO2 is separated from the hydrogen.

SCCS says the technology has been proven at an industrial scale and is low-risk but requires a high investment, and the efficiency of the coal then burned to power turbines is compromised.

Coal is burned in pure oxygen -- instead of air -- which creates an exhaust stream containing around 90 percent CO2 (the other ten percent is water vapor), making it easier to separate.

The only downside to this method is that it requires a lot of energy to remove the CO2. SCCS says new technology called chemical looping combustion is being developed. If done properly, there are virtually no emissions and could be retrofitted to existing coal-fired power stations.

Swedish power company Vattenfall is currently testing this method at the Schwarze Pumpe plant in Germany.

This involves removing CO2 from flue gases after coal has been burned. It's already been installed at a few gas-fired power stations like Snohvit's liquid natural gas facility in Norway.

One of its attractions is that it can be fitted to existing coal-fired power stations.

CO2 is removed by passing it through a solvent which absorbs it.

Needless to say, the process requires additional energy which SCCS estimates would raises costs by nearly a third.

The technology is already available but is used on a much smaller scale. The unknowns of scaling up the technology make it a less attractive proposition according to the SCCS.

Providing that carbon capture can become economically viable, vast amounts of CO2 will need to be stored. There are a number of projects around the world where carbon sequestration are being tested, with many others at the planning stage.

According to the SCCS, CO2 can be injected into depleted oil and gas reservoirs, non-mineable coal seams, the ocean or deep saline aquifers which offer great capacity. An impermeable cap rock above storage sites would stop CO2 leaking back out.

But some scientists remain concerned.

"We're not yet knowing where it's going, not knowing what the liability questions are, if it should bubble to the surface, and what the health impacts are," Wentworth told CNN.