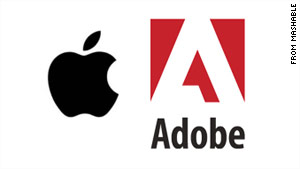 (Mashable) -- The saga of Adobe and Apple or, more precisely, Flash app development for the iPhone, is drawing to its inevitable conclusion.

It all started with Apple's change to its iPhone Developer Program License Agreement -- the notorious article 3.3.1 -- which banned the use of the Flash-to-iPhone converter. In the simplest of terms, the article makes it meaningless for developers to create Flash apps that target the iPhone because Apple can ban them at any time.

Now Mike Chambers, the principal product manager for developer relations for the Flash platform at Adobe, has put a full stop to the story from Adobe's side.

In a lengthy blog post, he calls for developers of Flash apps for smartphones to focus on Android and stop developing apps for the iPhone. He also announces Adobe's intention to stop working on the Flash-to-iPhone converter.

"We will still be shipping the ability to target the iPhone and iPad in Flash CS5. However, we are not currently planning any additional investments in that feature," Mike says.

In the post, he also criticizes Apple's treatment of developers.

"If you want to develop for the iPhone you have to be prepared for Apple to reject or restrict your development at anytime, and for seemingly any reason," he says.

So, that's it for Flash apps on the iPhone. Apple may have won this round, but the wall around its garden just got a little bit taller.