Opinion: Antarctic trash led to mission to clean up the planet

By Jo Royle, for CNN 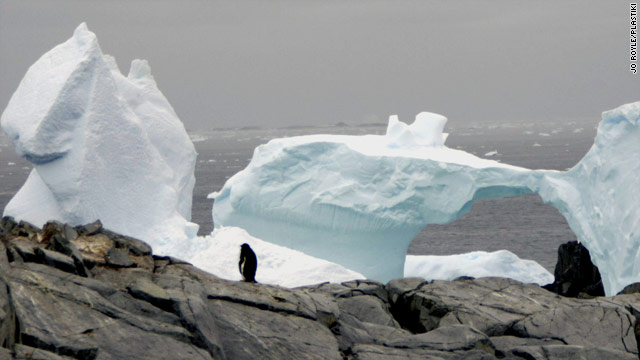 (CNN) -- A few years ago, weaving in and out of icebergs, a pink dawn rising over a forest of glaciers on the sub-Antarctic island of South Georgia, I realized a childhood dream.

I had been at sea for nearly two months, without seeing land. My senses were so alive. I recall the landscape, a menacing, jagged chain of mountains that have defeated so many climbers. Mother Nature's ice sculptures in various shades of blue and purple pastels, sawing albatrosses with their 12-feet wingspan and the butterfly stroke of the endearing penguins.

The air was so clean, so sharp that it tingled your nose on every inhalation. Its clarity played games with the horizon, making things look miles nearer than they actually were.

Our first stop was to present our treasured permits to the Governor at South Georgia's only manned base. We then set off to circumnavigate the island and visit the Antarctic-facing hostile shores of the south-side. Only a handful of sailing boats have ever navigated these waters. Much of this part of the world is unchartered, and we quickly understood why Shackleton had named his land-fall Cape Disappointment.

Clear pictures of this mission have never been filed away in my mind. It is tricky to pinpoint your life time's "best" expedition, places visited, but during my first visit to South Georgia and the Antarctic peninsula the penny really dropped.

I recall taking the Zodiac ashore and the feeling, for the first time in my life, of being a visitor to a land dominated by non human life. Approaching the beach we saw the cause of the stench in the air, thousands of male fur seals, grunting and fighting.

We had been warned about these desperate males who could pounce at any moment, mistaking us for the female seals that they were already lining the shores for. Fur seals are very territorial, each operating within a three meter square perimeter. They also nurture nasty bacteria in their mouths and the consequences of a bite on such remote shores can be lethal.

Exploring the remote Antarctic shoreline I was faced with a staggering accumulation of marine debris, and it broke my heart.
--Jo Royle, skipper of the Plastiki
RELATED TOPICS

Hearts pounding we surfed the icy shore break and quickly jump out of the Zodiac. Armed with sticks we had to breach the males' first line of defense by taking advantage of their poor vision and tickling their whiskers. Tricking them into believing that we were a group of more dominate males. We jumped from the imminent attack of one fur seal, into the flappers of another, passing en route the odd bull elephant seal weighing in at about four tons.

A week later we were exploring the south side of the island, the leeward facing shores of the notorious hostile Southern Ocean. Next stop the Antarctic continent, a land that no nation has claim over and no human can permanently inhabit.

Exploring the remote shoreline I was faced with a staggering accumulation of marine debris, and it broke my heart. How could we as intelligent human beings have such a far reaching impact on a land that didn't even feel like it belonged to the human race? A land that only a handful had ever stepped foot on.

This experience fundamentally changed my life. I had spent years sailing, and the oceans had taught me how to live resourcefully and sustainably. Now I wanted to give something back to nature. From that moment on the focus of my work shifted, I wanted to discover why we had allowed our environment to be so damaged by our greed and laziness.

Through various sailing expeditions this change of tack has taken me on a new journey, from working with NGOs, such as Friends of the Earth and Earthwatch, to helping my sponsor, Pindar designing and implementing a quantifiable five year environmental strategy. I have since also undertaken an MSc in Environmental Science and Society, and now find myself the skipper of the Plastiki.

Over a coffee few years ago I opened the morning paper and was struck by a vividly illustrated article announcing Charles Moore's discovery of the Great Pacific Garbage Patch. The statistics were shocking. Charles described an area in the Pacific, twice the size of Texas, transformed literally into a plastic soup, where one part plankton to six parts plastic could be trawled.

My involvement with the Plastiki has led to numerous conversations on the topic of the "garbage patch." Conversations with people who are working on solutions to remove all the plastic, to people asking me, "how are you going to navigate the Plastiki through the 'garbage patch'," as if it were similar to navigating through brash ice.

I came to realize that the general feeling is that this is a problem for scientists to solve. If the "garbage patch" could be removed then the health of our oceans would be miraculously restored.

Unfortunately it isn't that simple. There are in fact five known "garbage patches" in the world's oceans. These garbage patches are vortices that form where two ocean currents meet, in effect a giant oceanic toilet that never flushes.

The inspiring thing about building the Plastiki in San Francisco, it that the city has banned the use of Styrofoam, is done with the plastic bag, and has banned the use of bottled water in government-run buildings. This proves that solutions can be found, and the rest of us have some serious catching up to do.

This year we are celebrating the 100th anniversary of the invention of plastic. We are surely not meant to be celebrating the fact that the world gets through a massive 230 million tons of plastic in a year, 90 percent of which is not recycled. It is really only in the past 50 years that plastic has become integral to our everyday lives, another point that makes me realize that we can vastly cut back our consumption of plastic if consumers weren't so lazy, and designer thought "smarter" early on in the manufacturing process.

Research shows that these items of plastic never leave our planet. Once in the ocean plastic photo-degrades very slowly over many years. During this ongoing process it separates into smaller and smaller particles, therefore increasing its initial surface area.

As plastic is a petroleum based product these small particles act as persistent organic polluters, which means that they form a sponge attracting toxins such as insecticides and pesticides. The filter feeder fish at the bottom of the food chain then ingest these nano-particles of plastic. If these fish survive and do not starve from lack of nutrients as a result of filling up on plastic, they will get eaten by bigger predators, who in turn ingest the plastic. The cycle goes on and the levels of toxicity increases until you get to the top of the food chain with pelagic fish such as swordfish that end up on our dinner plate. Charles Moore once told me that one in three male swordfish lay female eggs.

So what is this toxicity in our food chain doing to our health and the health of our children? Is this toxicity linked to the ever increasing statistics of infertility problems and cancers? The scary thing about plastic is that even though we have the feeling that plastic is essential to our everyday life we know so little about its toxicity.

Plastics affect our health and the lives of the estimated 1 million seabirds, 100,000 marine mammals and sea turtles that die every year when they entangle themselves in marine debris or ingest it. Wherever we live we need to feel connected to the oceans, as they are our umbilical cord to life, driving the world's weather systems, ensuring we can take our next sip of water and our next breath.

With little effort we can all start doing something to help. For the duration of the Plastiki expedition I urge you to remember your re-useable water bottle, this alone will help to reduce the 200 billion liters of bottled water consumed each year.