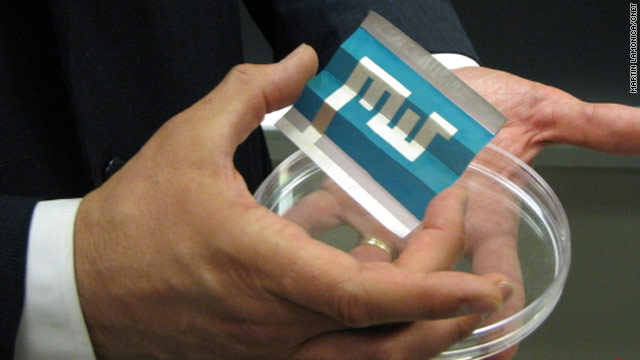 (CNET) -- Scientists at the Massachusetts Institute of Technology have successfully coated paper with a solar cell, part of a suite of research projects aimed at energy breakthroughs.

The printed solar cells, which Bulovic showed at a press conference Tuesday, are still in the research phase and are years from being commercialized.

However, the technique, in which paper is coated with organic semiconductor material using a process similar to an inkjet printer, is a promising way to lower the weight of solar panels. "If you could use a staple gun to install a solar panel, there could be a lot of value," Bulovic said.

The materials MIT researchers used are carbon-based dyes and the cells are about 1.5 percent to 2 percent efficient at converting sunlight to electricity. But any material could be used if it can be deposited at room temperature, Bulovic said. "Absolutely, the trick was coming up with ways to use paper," he said.

MIT professor Karen Gleason headed the research and has submitted a paper for scientific review but it has not yet been published. MIT and Eni said this is the first time a solar cell has been printed on paper.

During the press conference, Scaroni said that Eni is funding the center because the company understands that hydrocarbons will eventually run out and believes that solar can be a replacement. At the same time, he said, current technologies are not sufficient.

"We are not very active (in alternative energy) today because we don't believe today's technologies are the answer of our problems," he said.

The paper solar cells are one of many avenues being pursued around nanoscale materials at the Eni-MIT Solar Frontiers Center. Layers of these materials could essentially be sprayed using different manufacturing techniques to make a thin-film solar cell on a plastic, paper, or metal foils.

Silicon, the predominant material for solar cells, is durable and is made from abundant materials. Many companies sell or are developing thin-film solar cells, which are less efficient but are cheaper to manufacture.

During a tour, Bulovic showed one of the center's labs, where researchers use a laser to blast light at nanomaterials for picoseconds. A picosecond is one trillionth of a second. The laser provides data on how the light excites electrons in the material, which will provide clues as to whether it will make a good solar cell material, he explained.

MIT is focusing much of its effort on quantum dots, or tiny crystals that are only a few nanometers in size. A human hair is about 50,000 to 100,000 nanometers thick.

By using different materials and sizes, researchers can fine-tune the colors of light that quantum dots can absorb, a way of isolating good candidates for quantum dot solar cells.

Researchers at the center are also looking at different molecules or biological elements which can act as solar cell material. These cheap thin-film materials can be used on their own or added to silicon-based solar panels to enhance the efficiency, Bulovic said.

If 0.3 percent of the U.S. were covered with photovoltaics with 10 percent efficiency, solar power could produce three times the country's needs, including a transition to electric vehicles, Bulovic said. For example, the easement strip on highways could be coated with material that could capture energy from the sun.

But don't expect a revolution in solar power tomorrow.

"I'm giving you a whole bunch of hype," Bulovic said while explaining solar's potential during the tour. "It usually takes 10 years from the time between when you invent something and you commercialize it." He estimated that many of the technologies in the labs were in the first three years of a five-to-seven-year development cycle.