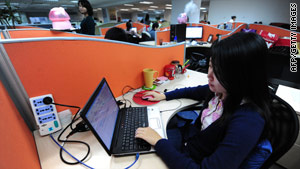 Can words from Facebook status updates show whether a country is happy or not?
STORY HIGHLIGHTS
RELATED TOPICS

(Mashable) -- Facebook has extended its "Gross National Happiness" prototype app to 18 new countries. The app analyzes words in status updates like "awesome" or "tragic" to track changes in the collective emotional state of its users.

When Facebook applied the methods to its U.S. userbase last year, it found that happiness went way up on holidays and way down when celebrities like Michael Jackson or Heath Ledger passed away. While the results of the study weren't surprising, the idea of using status updates to measure national happiness was a novel one.

As you might have expected, residents of each country become happier on that country's holidays and during big events ? for example, Spain is happier on Saint Jordi's Day and U.S. residents are happier around the time of the Super Bowl. And speaking of sporting events, those can affect the results too; dips in happiness correspond with major sports defeats. Even bigger dips accompanied natural disasters like earthquakes, of course.

We noticed that in some cases small increases of negativity accompanied big leaps in positivity. Not everyone has a great Christmas thanks to travel stress or family drama, so it's no surprise that the negative comments go up a little bit at that time of the year too. Play with the app yourself at Facebook's website to see what insights you can conjure up.

If you find this data interesting, you'll also appreciate this: Facebook decided a couple of months ago to find out how relationship status affects happiness. Unsurprisingly, it found that folks in relationships tended to post happy updates more frequently. Singles were better off than users who didn't list their relationship status or were in open relationships, however.