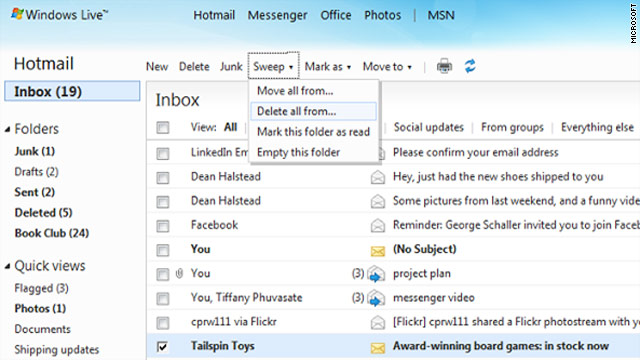 The updates to Hotmail are expected to roll out in the next few weeks.
STORY HIGHLIGHTS
RELATED TOPICS

(CNN) -- Hotmail, the world's most widely used e-mail service, is getting a major overhaul from Microsoft in a bid to fend off competitors like Google's Gmail.

Microsoft says the planned update to Windows Live Hotmail is designed to remove clutter and let users interact with other sites and applications while checking their mail.

In the blog post, Microsoft program manager Dick Craddock said the company studied e-mail usage for a year while considering the changes.

"People made it clear to us that the No. 1 thing they wanted their e-mail service to address -- whether it was Hotmail or any other e-mail service -- was to help them manage the clutter in their inbox; not just the spam, but all the mail they get that's clogging their inboxes," he wrote.

A key feature to the new Hotmail, which will be rolled out over the next few weeks, will be a "sweep" feature that allows users to clean out their inbox in one fell swoop.

The single-click feature lets the user select a single e-mail sender, or multiple senders, and automatically delete every message from that sender.

Another single click will let users decide which e-mails they want to look at -- from people on their contacts list, from their social networking sites or otherwise.

Microsoft's study showed that only about 25 percent of e-mail people get is from members of their contacts list. The rest tends to be business related, from social networks, tracking of purchases they've made online and spam, the post says.

Despite the growing popularity of social networks like Facebook as a way to communicate, Craddock wrote that people are getting more e-mail than ever.

While it remains on top of the global e-mail market with roughly 350 million users, the decade-and-a-half old Hotmail has been a largely stagnant service compared to third-place Gmail, which has been steadily picking up users.

Yahoo is also more widely used in the United States than Hotmail.

Gmail has always offered ways to link up with Google's expansive list of internet offerings, most recently its foray into the world of social networking, Google Buzz.

By comparison, Hotmail and Yahoo have offered more-basic mail to their users.

Hotmail's proposed changes follow some of what Gmail has done.

For example, with the new Hotmail, people will be able to open and edit PowerPoint documents in their e-mail accounts, whether they have PowerPoint installed on their computer or not.

Hotmail Active View will give people an automatic preview of their incoming mail, including a look at photos they've received -- both attachments and links to photo sites like Flickr.

They'll be able to watch YouTube videos, check social networks and perform other outside tasks without ever leaving e-mail. Gmail has similar features.

The proposed changes got mostly positive feedback early Tuesday from the tech community -- where Hotmail's vanilla setup hadn't garnered many fans before.

"It'll be hard to steal users away from Gmail -- which still has dozens of minor features that Hotmail doesn't (just check the Labs) -- but Hotmail will most likely be a worthy competitor after the new version is launched this summer," Stan Schroeder of social media blog Mashable, wrote on Tuesday.

Harry McCracken of PC World wrote that the new Hotmail could be preferable to Gmail in some ways and pick up new users, particularly from flailing AOL.

"Hotmail also feels less densely packaged with stuff," he wrote. "I could see some folks preferring it to Gmail, which is beginning to flirt with bloat."