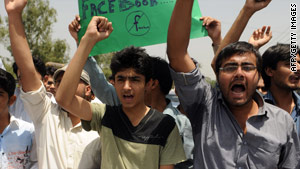 There were riots around the world in response to a series of cartoons of Mohammed in a Danish newspaper in 2005.
STORY HIGHLIGHTS
RELATED TOPICS

The Pakistan Telecommunication Authority issued the order a day before "Everybody Draw Mohammed Day," scheduled by a Facebook group with the same name.

"Obviously (the blocking of Facebook) is related to the objectionable material that was placed on Facebook. That is why it is blocked," said Khoram Ali Mehran of the telecommunication authority.

The organization has not received any complaints from internet users about the blocking of Facebook, he said.

"The majority of Muslims worldwide object to any representation of a prophet of God," he said.

"Hate speech is wanting a group eradicated, physically harmed or dead. I dont think drawing Mohammed falls under that category," she said.

"Islam is not above criticism or cartoons. I believe in equality, and censoring Mohammed while we can draw every other

figure in the world does not equal equality," she concluded.

Sulpovar's group and a similar one had attracted about 7,000 fans between them Wednesday. Groups opposing the idea had about 68,000.