Could online maps save coral reefs? 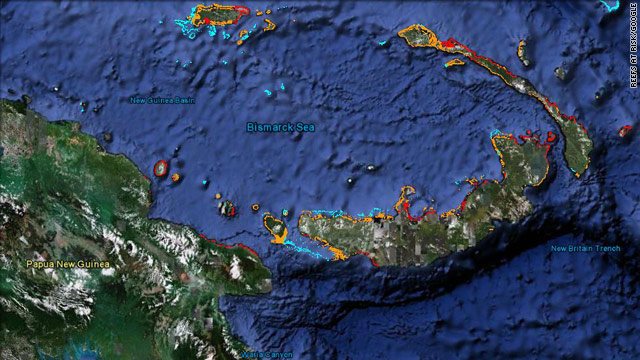 From the Coral Triangle to the Caribbean, Reefs at Risk Revisted will use color-coded maps to show threats to coral reefs.
STORY HIGHLIGHTS

(CNN) -- You used to know them as maps, but in a Web 2.0 world they're now called geographic information systems (GIS) and they could play a key part in saving the world's endangered coral reefs.

Harnessing the power of interactive maps is Reefs at Risk Revisited, a conservation and research project headed by the World Resources Institute. It is in the process of updating its 1998 survey on the threats to the world's coral reefs and central to the project is Google Earth.

The online map is being used to collect data from nearly 30 project partners, including WWF and Conservation International, and the final report will be freely available to the public.

People will be able to zoom around the world as they normally would, but instead of "flying" from their house to Pyongyang they will be able to almost literally dive into the reefs and discover the pressures on some of the world's most delicate marine ecosystems.

The Indian Ocean has become much more threatened than it was 10 years ago.
--Lauretta Burke, Reefs at Risk Revisited
RELATED TOPICS

Lauretta Burke who heads the project for the World Resources Institute is enthusiastic about the way in which interactive maps have enabled her team to gain more information and show it in an informative and engaging way.

"The new maps will be 64 times as detailed as the previous report," she told CNN.

"The sharing of information has also improved [between research groups], which has allowed us to be aware of what has worked and how to replicate those success stories."

The project looks at four main threats to coral reefs -- marine-based threats, over-fishing, coastal development, and land-based sources of pollution -- in six main coral reef regions. Each threat will be color-coded and information on specific areas can be clicked on and explored.

One new element that will be included in the report will be the impact of climate change, with information on warming seas and ocean acidification. While there have been success stories in managing coral reefs, the latest research has provided some cause for concern.

"The Indian Ocean has become much more threatened than it was 10 years ago," said Burke.

"And the Pacific, which was a relatively low threat area 10 years ago, has increased a lot. The other striking finding is of the four local threats it's over-fishing that has really increased the most."

Burke says that it isn't just sea-life that will be highlighted on the map, but the dangers to communities that depend on reefs, be it through tourism or fishing, for their livelihood.

The final report that will be published in September will also look to the future, to 2030 and 2050, projecting what may happen to coral reef communities and what could be done help them survive additional climate-related threats.

"The main message is that if we don't reduce our emissions of CO2 in the atmosphere... we will lose these ecosystems," said Burke.

Burke also hopes the maps will be used by the public as well as conservation groups that could use them to focus their campaigns on highly-threatened locations.

Burke has used the maps herself to pick a diving vacation spot and thinks eco-minded tourists could easily do the same. The IMAX film "Coral Reef Adventure" based their shooting locations on Reefs at Risk information.

"We do hope [the project] will be used as leverage for more investment in coastal management and more focus on it," said Burke.

"The importance is in reducing local pressures, particularly of over-fishing, so that we can create more resilient systems that might be able to survive these times of elevated CO2 and increased warming."