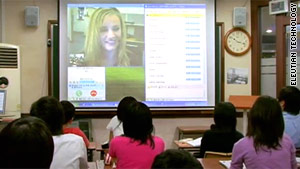 (CNN) -- When it comes to call centers filled with English-speaking employees, India likely comes to mind. Not a tiny town in Wyoming called Ten Sleep, population about 300.

What Ten Sleep has is not, exactly, a call center. Instead, the town is home to a teaching center that is open 24 hours a day, seven days a week. There, American teachers provide real-time video English lessons to thousands of students in classrooms across Asia via high-speed fiber optic networks.

Ten Sleep isn't the only small Wyoming town that has a center: So does Cody, Powell, Lovell and nearly a half dozen other communities across the state. They're owned by Eleutian Technology, a company that is using the internet to bring jobs once outsourced to cheap labor in the East to back to unemployed Americans in the West.

"This is more of an 'insourcing' phenomenon," said Robert Grady, managing director of Cheyenne Capital Fund, which invested $10 million in Eleutian in February. "We are creating jobs by helping the development and emergence of the high growth economies in Asia. We are the fastest private employer in Wyoming, and we are hiring at a time when job creation is priority number one."

When Eleutian was founded in Ten Sleep back in 2006, only a handful of teachers were involved. Now the company employs 700 educators who have either been laid off from public school systems or who are seeking part-time employment. They earn about $12 an hour.

Kent Holiday, head of the company, says he expects to hire more than 3,000 instructors over the next couple of years as well as set up teaching centers in almost every community in Wyoming. There are also plans to expand to other states. The company has built one office in Utah.

Holiday says the idea to start Eleutian (named after the Aleutian Islands, which stretch like a broken bridge between America and Asia) began when he returned home to Ten Sleep after spending a decade working in the telecom sector in South Korea. His two children had enrolled in the local school, and with Holiday's plans to relocate his family to Utah, the school's enrollment would drop from 71 to 69, which meant it would have to close and its teachers would have to find elsewhere to work.

Around that time, high-speed internet cables were hooked up to every home and business in Ten Sleep thanks to a federal subsidy program aimed at connecting rural America to the web.

Holiday said he told the local school district he would stay if he could use its facilities and its teachers to start a business providing English instruction to students in Asia where, according to Holiday, there aren't enough skilled language instructors, particularly in non-urban areas, to teach.

The company pipes its teachers into 500 classrooms across Korea and Japan via video conferencing technology and is now vying for the biggest prize of all: China (Holiday and Brady made a trip to Beijing to meet with local education officials there at the end of June).

"You can't get thousands of teachers to go to Korea and you certainly won't get them to go to rural Korea," Holiday said. "Take that problem and then go to rural China. No one wants to go there."

An article published last November in Korea's JoongAng Daily said the country would recruit 100 teachers from India to work in rural areas where there is a shortage of English instructors and after failing to find qualified teachers from the West. Of the more than 7,000 teachers employed in Korean schools, only 13 percent are certified, the article said.

"We are offering the Asians what they want," Holiday told CNN. "We are bringing in a real, certified school teacher and combing them with a local teacher and teaching the students in the classroom."

The Wyoming teachers work in shifts that begin when the sun is setting in America and rising in Asia. Some teach from home while others go to the teaching centers in the middle of the night. They use curriculum from Pearson.

"One of the things that I do miss is being in the classroom and being able to physically touch and play games with the students," said Candace McMillan who works in a teaching center in Powell. "You miss that tangible part of it."

Over the eight years that McMillan taught science, art and math to middle schoolers, she was laid off three times.

Eleutian is also attracting more jobs to the state.

"The effect they are having on the economy is just unreal," said Kim Rightmer, vice president of the Casper Area Economic Development Alliance. In April, Eleutian opened a teaching center in Casper and is considering eventually moving into a now empty building that once housed a call center for OfficeMax.

"It is gathering a lot of attention and attracting companies with similar technology needs," Rightmer said. "Eleutian is providing awareness of opportunities outside the state and outside the country -- what kind of impact we can have on the other side of the world."

And Eleutian is an example of how more companies, even local governments, in rural America are quietly inking deals in the East, particularly in China.

Last August, Arkansas' lieutenant governor traveled to Beijing to discuss business opportunities with the government. Wisconsin has also been forging economic ties with the Chinese. Most recently, representatives from Idaho were looking for investment from wealthy Chinese in a gold mine near Boise.

"In 20 years, the states that are going to have a lot of power and be part of this global economy will be the Wyomings and the North Dakotas and the Iowas," Holiday said. "People in middle America are pretty savvy business people."