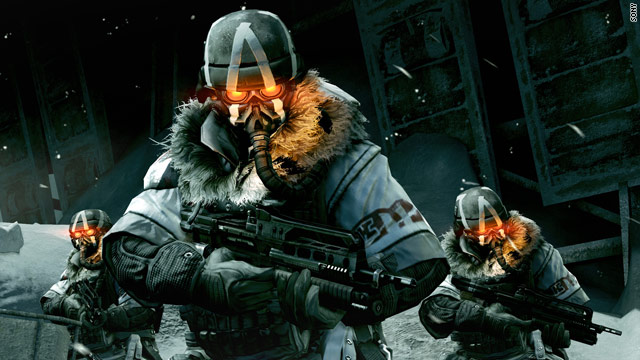 Los Angeles, California (CNN) -- From motion controls to cloud-computing solutions and 3-D gaming technology, there was no shortage of futuristic goodies on display at this year's interactive entertainment industry confab E3.

But with so much attention being paid to hardware innovations like Sony's PlayStation Move and Microsoft's Kinect gesture-tracking interfaces -- as well as Nintendo's new 3DS handheld -- it's easy to forget that it's really all about the games.

Available systems such as the PC, PlayStation 3, PSP, Nintendo DSi, Wii and Xbox 360 are still the tools of almost all gamers, and probably will be for several years.

These systems, of course, would be nothing without jaw-dropping software titles to show off their potential.

Among the hundreds of promising outings on display at E3, the following five were among the most buzzed-about titles by critics, fans and industry insiders. Each promises to keep millions of thumbs happily waggling in the months to come.

"Killzone 3"
Sony hopes that this stunning first-person shooter -- a PS3 exclusive which features visceral combat in a bleak futuristic setting -- will do for 3-D games what "Avatar" did for 3-D movies. It aims to make its case by adding jetpacks and destructible environments, plus upping visual fidelity to insane levels and introducing support for the PlayStation Move.

Swirling snow, glowing-eyed adversaries and flying bullets will be the order of the day when it ships in February 2011.

"Rage"
Noted developer id Software wrote the book on run and gun outings with classics like "Wolfenstein 3D," "Doom" and "Quake." Now the studio is turning its attention toward crafting a stunningly beautiful, "Mad Max" style post-apocalyptic wasteland where you can alternately blow slavering crazies away or speed along in playable vehicles enjoying the sun-scorched scenery.

While only a brief demo of the PC and PS3 title is being shown at the conference, it's already got fans' antennas up.

"The Legend of Zelda: Skyward Sword"
Wii owners have been feverishly waiting several years for a new installment in the popular series of whimsical, fantasy dungeon-crawling action-adventures.

They'll have to wait a little longer, as this new Wii title isn't due until 2011. But thanks to the highly accurate Wii MotionPlus movement-sensing peripheral, which allows you to control a bow or sword through physical gestures, plus new items like a flying beetle and whip, it promises several engaging new enhancements.

"Portal 2"
This update takes the popular puzzle game, wherein you instantly create wormholes to solve puzzles by teleporting between two locations, and greatly expands the formula. The game now adds physical effects like air currents to travel between these gates, and paint that can change the physical properties of objects, making them slicker or bouncier.

Coming for PC, PS3 and Xbox 360 in 2011, it's expected to cheerfully confound critics and fans alike.

Traveling around in high-tech and zero-gravity environments in an armored suit, you'll solve puzzles and squirm as swarms of foes dance around your pitiful spear gun.