Finding new uses for the iPad 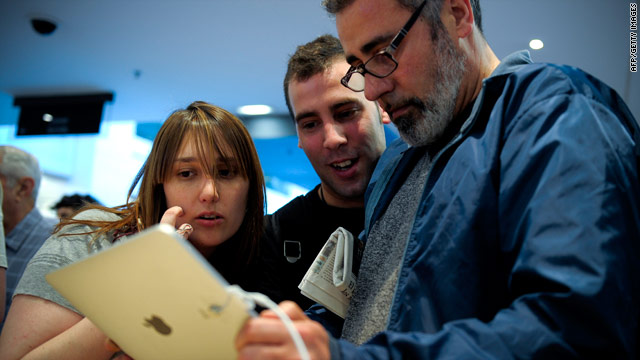 Photo editing and bedtime stories are some of the nontraditional uses that have been found for the iPad.
STORY HIGHLIGHTS
RELATED TOPICS

Omar L. Gallaga is a regular technology contributor to NPR's All Tech Considered segment on "All Things Considered." He writes about technology for the Austin American-Statesman and for the newspaper's tech blog, Digital Savant.

(CNN) -- In our household, we've had more than two full months to get used to Apple's iPad, the device Steve Jobs promised us was 9.7 inches of magical computing.

Despite my skepticism when the iPad was announced back in January, I've come to accept the device's shortcomings (no camera, no SD-card slot, apps that are pricier than their iPhone equivalents) and to become a real fan.

Though we bought it for my wife, I'm using it as much as she has. We bought it mostly for her light Web surfing.

She pays bills on the iPad, shops and catches up on e-mail.

I'm using it to try out games designed just for the iPad ("Plants vs. Zombies" is still my favorite), to read iBooks (I read Stephen King's 1,000+ page "Under the Dome" primarily on the iPad despite owning the print version) and to catch up on Twitter or episodes of "Lost" with the ABC TV app.

My 2-year-old daughter sometimes gets to watch Barney or Elmo via the Netflix app or insists that we play music for her in iTunes.

We're using the iPad in all the ways Jobs said we would: to buy and consume media, to play games and to browse the Web. But part of what's made the iPad such a success is all the unexpected surprises in the App Store and the ways people have learned to bend the technology for their own use.

Here are a few unexpected ways I've found to get more out of the iPad -- alternative uses that I wasn't expecting to find so compelling before we bought it on launch day:

The iPad as a photo editing machine

But the iPad's big screen, fast processor and ability to grab images off the Web (say, from your Flickr or Picasa photo account) make it a natural for editing digital photos.

I've been using an app called "PhotoGene for iPad" ($3.99 as of this writing) that's one of the best, most intuitive photo-editing programs I've used on any platform.

It allows you to crop, color correct or filter any image in your iPad photo library, all with onscreen touch controls. You can then copy the result back into your library, e-mail it or even share it on Facebook or Twitter.

Now that you've got a good piece of editing software, it might make sense to invest in Apple's $29 Camera Connection Kit. The kit comes with a USB adapter and SD card adapter, allowing you to connect a digital camera, iPhone or SD memory card directly to the iPad to transfer photos and some formats of videos.

You can also use the USB adapter to connect headsets, some keyboards and microphones (which we'll talk about in a bit).

The iPad for bedtime stories

We're not quite ready to hand over the iPad to our 2-year-old for any extended length of time, but we have been letting her try out Disney's Digital Books apps before bed.

"The Princess and the Frog Read-Along" and "Toy Story 2 Read-Along," among others (each $8.99), are read aloud along with highlighted text, but each app also features puzzles, coloring games, music and other games.

They also allow you to record your own audio and play it back along with the story.

That's also the idea behind "A Story Before Bed," an app featuring personalized children's books. You can record yourself reading one of the books offered by the service with a webcam and then watch the video along with the illustrated book in the iPad app.

The app is free, but prices vary for the books. The service features discounts for military parents and touts "A Story Before Bed" as a way for faraway parents and grandparents to stay in touch with kids.

The iPad as an audio recording studio

There are several apps to record basic voice memos using the iPad's built-in microphone, but the Camera Connection Kit's USB adapter allows you to use an external mic for better audio quality.

I tested out a high-end consumer microphone, the Yeti from Blue Microphones ($149), and it sounded great in each of its four recording modes.

However, the free accompanying "Blue FiRe" app isn't specifically designed for the iPad and is displayed in a tiny, iPhone-sized window.

The recordings, however, sound good and can be uploaded to a Web server via FTP or accessed through any computer's Web browser that's on the same Wi-Fi network. It seems like a good solution for podcasting on the go or recording basic vocal tracks with minimal setup.