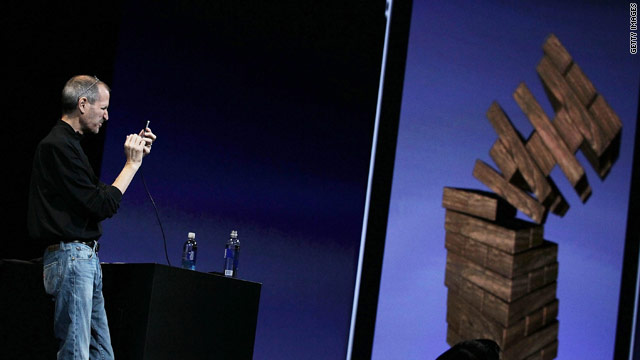 Editor's note: Scott Steinberg is the head of the technology and video game consulting firm TechSavvy Global, as well as the founder of GameExec magazine and Game Industry TV. He frequently appears as an on-air technology analyst for ABC, CBS, NBC, FOX and CNN. His most recent book is "Get Rich Playing Games."

But by adding a gyroscope capable of tracking handset orientation, velocity and rotation, the new iPhone 4 may completely redefine the way we interact with downloadable apps.

And as a result, mobile play may soon benefit.

Earlier models such as the iPhone 3 and 3GS offered a built-in accelerometer that let you tilt to steer in racing or flight games, or tip the handset to shift between horizontal and vertical views.

The new iPhone can now tell when you move up, down, left, right, forward or backward, or when you speed or slow your momentum. This opens myriad new frontiers for developers to explore in terms of upcoming game apps.

Obvious immediate fits include aerial dogfighting or racing simulations, which you might control simply by mimicking the motions of manning the wheel of a plane or car. Also inevitable are simple, Jenga-like puzzle game diversions, where precise hand movements will be required to stack or remove blocks from a teetering tower.

Dozens of developers undoubtedly already have pool-table simulators, golf and tennis games and titles that let you captain tanks and submarines in the works, as well.

What we're most excited about are the possibilities that the iPhone 4's gyroscope opens for richer, more immersive gaming experiences, such as fantasy dungeon crawls and sci-fi action-adventures.

Imagine being able to explore a dripping cavern's far reaches, barely visible in the flickering torchlight, just by tilting to peer around its lichen-covered interior. Or picture wandering a derelict spaceship's shadowed corridors and wheeling around to come face-to-face with a slavering mutant.

Using the gyroscope, it's possible to extend players' field of vision, eliminate cumbersome overlays that erode suspension of disbelief and offer more elegant controls for wielding a sword, machine gun or flashlight.

The iPhone 4's hardware provides for more spills, thrills and greater depth of in-game storytelling. The heightened levels of player engagement could benefit virtually every genre, from action and arcade to mystery and horror. From augmented reality apps that let you pilot R/C helicopters with a flick of the wrist to epic first-person shooters. The sky's the limit.

Who needs to wait for cutting-edge user interfaces like Microsoft's Kinect and Sony's PlayStation Move to arrive this fall? The future of motion controls may already be resting snugly in your pocket.