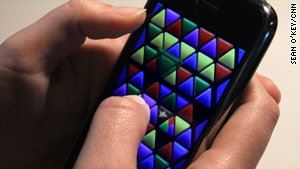 But now, Apple is stealing a page from the competition's playbook with Game Center, a social network for smartphone users that helps you instantly find and connect with opponents anytime, anywhere -- and offers global high score boards to compete on.

"We've seen this sort of thing on consoles for years, but never on a phone, and that's revolutionary," says Daniel Bernstein, CEO of Sandlot Games, publisher of celebrated franchises "Cake Mania" and "Tradewinds."

"People will soon be able to play more types of games than ever before, from social titles like 'FarmVille' to multiplayer games to those supporting trophies and ranking ladders."

Consider it the Facebook of mobile gaming. Planned to launch with a future iOS 4 update for iPhone and iPad, users can set up and browse profiles, issue friends invites to play and enjoy mobile multiplayer matches wherever the urge strikes.

"It's like dining in vs. takeout," explains game developer Steve Demeter, creator of popular puzzler "Trism." "Because Game Center's meant for a mobile device... you'll be more in touch with friends in games [and] have more ways to make new friends, helping make the community a real thriving thing."

Not that your DSi XL or PSP is headed for extinction anytime soon: Games for the iPhone, iPod Touch and iPad tend to be less sophisticated, with puzzles and arcade outings more common than first-person shooters or sprawling role-playing adventures.

But by offering a one-stop solution for mobile multiplayer networking, the inside word is that the service will ultimately let developers spend less time programming, more designing new and innovative games.

"Apple's finally getting serious about being a player in the gaming industry," says Pangea Software CEO Brian Greenstone, who says the technical support and software upgrades it could offer developers may lead to new breakthroughs. "Once they add buttons and a gamepad to the iPhone/iPad, it could be a DS or PSP killer."