'Star Wars' creator says laser too much like lightsaber 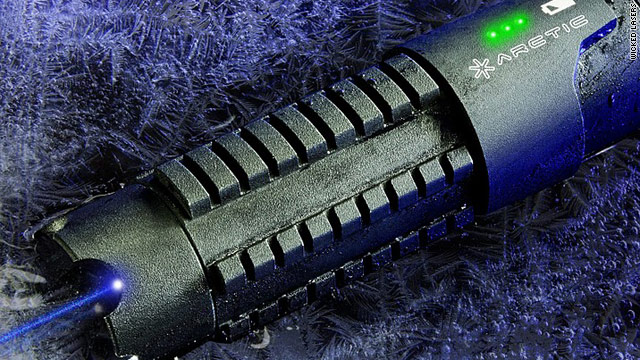 Lucasfilm Ltd. says this handheld laser is too similar to the famous lightsabers from the "Star Wars" series.
STORY HIGHLIGHTS
RELATED TOPICS

(CNN) -- "Star Wars" creator George Lucas wants to force a laser company to stop making a new, high-powered product he says looks too much like the famous lightsaber from his classic sci-fi series.

"It is apparent from the design of the Pro Arctic Laser that it was intended to resemble the hilts of our lightsaber swords, which are protected by copyright ... ," said the letter, dated last month and provided to CNN by Wicked Lasers.

The letter calls the company's newest laser "a highly dangerous product with the potential to cause blindness, burns and other damage to people and/or property."

Steve Liu, CEO of Wicked Lasers, said his 7-year-old company has been selling similar lasers for years and has never compared the product to the Jedi weapon wielded by Luke Skywalker, Darth Vader and others in the "Star Wars" franchise.

"Most people feel it's kind of ridiculous ...," he said. "We would never use any comparison like that to 'Star Wars' or a lightsaber or anything like that."

He called the $199 gadget's design fairly typical for a handheld laser and said it isn't a copy of the lightsaber.

"Lucasfilm shouldn't be saying something like that," he said. "They're a big company that needs to protect their trademarks. Maybe they're having to look like they're protecting their trademark in case they need to [protect it again] later."

The cease-and-desist letter doesn't accuse Wicked of using the term "lightsaber" in its marketing -- which Liu said is primarily aimed at industrial, military and research customers.

But it notes coverage from technology blogs that have frequently made that comparison.

A headline from tech blog Gizmodo called the device "a real life lightsaber." The Daily Tech blog called it "perhaps the first consumer laser weapon" and said it "comes in sleek packaging that looks, unsurprisingly like a lightsaber."

"These references make it clear that the public is being led to believe that the Pro Arctic Laser is an official lightsaber device and/or copied from our design," the Lucasfilm letter said.

A Lucasfilm spokesman did not immediately respond to an e-mail request from CNN for additional comment.

It's not the first time the company has sought help from the courts over perceived copyright threats to its lightsaber laser swords. In 2006, Lucasfilm filed suit against a Maryland-based company that produced lightsaber replicas, saying the products violated "Star Wars" trademarks.

Liu acknowledged that his company's new Spyder III laser is dramatically stronger than lasers from the past. Wicked Lasers advertises it as "the world's most powerful portable laser."

When coverage in the blogosphere increased orders, he said, Wicked altered the laser to add safety features. A safety lock feature prevents accidentally turning on the laser, and an extra lens reduces its power by 80 percent until it's removed.

Every laser is shipped with safety goggles, he said.

"You've got a lot of people who think this is kind of a cool toy, so we've decided not to ship the laser as it was originally advertised," he said.

More than two weeks after receiving the letter from Lucasfilm, Wicked has not stopped selling or changed the laser. The letter asked for written assurance of changes within five business days or threatened "the initiation of legal proceedings without further notice to you."

Liu said he hopes it doesn't come to that.

"Personally, they're some of my favorite movies," he said.