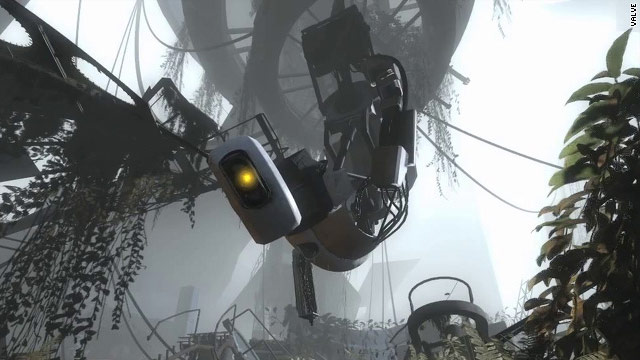 "Portal 2" features the return of GLaDOS, a murderous computer that tries to the destroy the player -- in the name of science.
STORY HIGHLIGHTS
RELATED TOPICS

(CNN) -- If you are a video gamer or know a gamer, here are the games and consoles that should be must-haves in the coming months.

The Nintendo 3DS, a hand-held console that allows games to be displayed in 3-D without the use of special glasses, took the Best of E3 2010 award from a panel of game reviewers.

In addition to the Best of Show award, the 3DS also won Best Hardware. It beat out Microsoft's Kinect motion sensor, which detects a player's movements without the use of a controller; Sony's Move system, a wand-like controller that mimics a player's hand and arm movements; and two "Rock Band 3" instrument controllers.

"Rage" (id Software/Bethesda), a first-person shooter/racing game, took home three awards: Best Console Game, Best Action Game and a Special Commendation for Graphics. Not much is known about the game itself, but critics were wowed by its look and feel from trailers shown at E3.

"Portal 2" (Valve) and "Dance Central" (Harmonix/MTV Games) each won two awards for their entries at E3. "Dance Central," a game that will use the Kinect controller, won Best Original Game and Best Motion Simulation Game.

"Portal 2," a sci-fi game in which the player must battle a murderous computer, won Best PC Game and Best Action/Adventure Game.

The Game Critics Awards are decided by representatives from 31 gaming publications after the E3 convention closes. The first Best of Show award was presented in 1999 to "Freelancer," a space trading and combat simulation game. However, "Freelancer" wasn't available to the public until 2003.