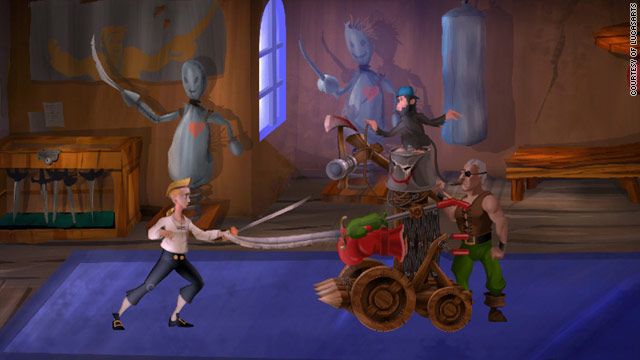 "Monkey Island 2 Special Edition: LeChuck's Revenge" is just one of the great games you can play on Apple's iPad.
STORY HIGHLIGHTS
RELATED TOPICS

(CNN) -- If you have an iPad, you already know Apple's dirty little secret.

Despite efforts to brand the tablet PC as a proper computer designed for business, e-reading and productivity, it's basically just an oversized iPod touch that shines brightest when doubling as a 21st-century Game Boy.

It's compatible with tens of thousands of addictive iPhone games, whose visuals can increase in size to fill the device's display. Dozens of original titles tailor-made for the iPad's larger multitouch screen are also available.

Here are five of my favorites, none of which helps justify the gizmo's nosebleed price tag ($499 and up). Nevertheless, I can't put them down.

"Monkey Island 2 Special Edition: LeChuck's Revenge" (LucasArts, $9.99): After years languishing in development purgatory, one of home computing's most treasured "point-and-click" puzzle-solving adventures gets a new lease on life. This is a modernized update of the 1991 Amiga and PC original, a tongue-in-cheek tale starring aspiring buccaneer Guybrush Threepwood.

Extras include brand-new, high-definition artwork, peppier voice acting and a re-mastered soundtrack. Beyond opportunities to revisit familiar characters, the gut-busting tale also offers a better hint system for those stumped by its offbeat brainteasers and options to play with classic visuals to relive childhood memories.

"Civilization Revolution" (2K Games, $12.99): High price tag aside, you'll find few portable strategy games that offer as much replay value for the dollar. Build an ancient civilization that can stand the test of time via trade or warfare while you manage resources, explore foreign lands and research new technologies.

Though it is available on portable and home consoles, the iPad edition features high-res visuals, a broader playfield and a more intuitive user interface, all while introducing a custom scenario and world creator. Fans can create their own maps and challenges, providing endless megalomaniacal thrills. Now that's what we call history in the making.

"Scrabble" (Electronic Arts, $9.99): The timeless board game, in which players use lettered titles to build words worth varying points, proves a natural fit on the iPad, as it looks great and controls like a charm. Simply set the gizmo on a coffee table to enjoy an evening of vocabulary-building thrills, or stage wireless head-to-head standoffs against opponents.

There's even a party play option for up to four that, once you've downloaded a free Tile Rack App, lets you use your iPhone or iPod touch as a way to discreetly manage your tiles. Although pricey, it makes a solid fit for any modern family game night.

Offering a greater level of detail, plus more comfortable controls and discernable battlefields than its smartphone cousin, it's an easy-to-learn, tough-to-master challenge that begs for "just one more" round.

"Plants vs. Zombies HD" (PopCap Games, $9.99): One could easily make a case for the many great titles the iPad offers in all genres from arcade action ("Geometry Wars: Touch") to god games ("We Rule") and comedic mayhem ("Angry Birds HD") here.

But as blends of reflex-intensive thrills and real-time strategy go, this brilliant tale -- which sees you furiously planting peashooters, Venus flytraps and fungi-shooting spores to protect your garden from shambling cadavers -- tops my list.

Credit its colorful cartoon aesthetic and finely balanced play, as you're forced to decide between harvesting sunlight, planting potato roadblocks or deploying cherry bombs against ever-larger waves of undead attackers.

Special mentions should also go to: