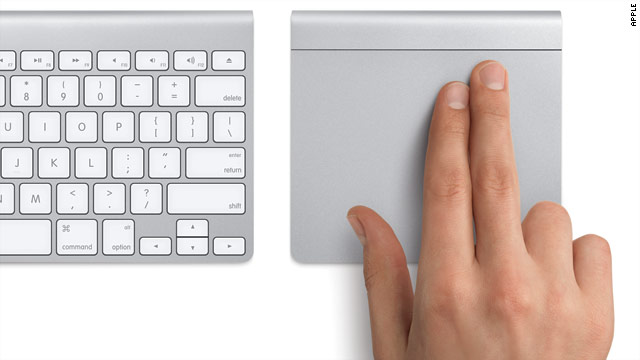 (CNN) -- Fans of multitouch-screen smartphones that let you scroll or zoom by flicking or pinching your fingers now will be able to interact with their desktops in the same way.

Apple on Tuesday began selling a Magic Trackpad, a new wireless device that connects via Bluetooth to any Mac computer and allows users to manipulate what's on their screens through gestures.

Like track pads on laptops, the battery-powered gadget can be used instead of a mouse or in conjunction with one. The pad's entire surface is a button that clicks, so that people can use it in place of a mouse.

"Swiping through pages online feels just like flipping through pages in a book or magazine. And inertial scrolling makes moving up and down a page more natural than ever," says Apple on its Magic Trackpad web page.

Some details about the device had already leaked, and its official launch had been expected since it was mentioned at Apple's developers' conference in early June.

The Magic Trackpad is made from glass-covered aluminum and is the same angle and height as a Mac desktop keyboard, which it's designed to sit next to. It comes as a standalone accessory and costs $69.

Apple says the device supports a set of gestures that include two-finger scrolling, pinching to zoom, rotating with your fingertips, three-finger swiping, or switching between applications with four fingers.

"Go from typing to gesturing in one motion, or do both at the same time," Apple says in its product description.

Apple began selling the Magic Trackpad in its stores and on its website Tuesday morning along with an updated line of iMac and Mac Pro computers. Its online store was down for a period of time beforehand, causing the usual fevered web speculation about what the closely watched company might introduce.

Magic Trackpad quickly became a trending topic on Google and Twitter, although not everyone was impressed.

"First of all, bad name again," wrote one Twitter user who goes by Clambake01. "Second, what's the big whoop? It's identical to a MacBook trackpad if I'm not mistaken."