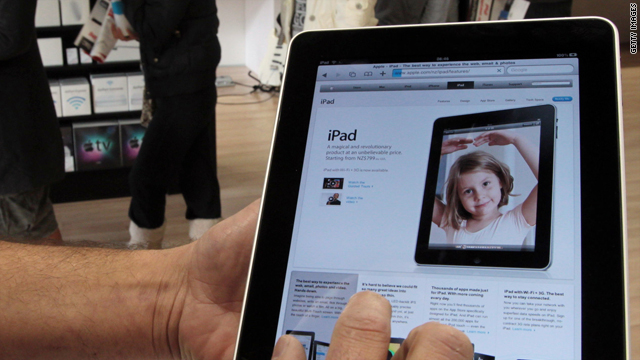 The iPad's automatic shut-off feature activates when the device is exposed to direct sunlight for too long.
STORY HIGHLIGHTS
RELATED TOPICS

(ArsTechnica) -- Three iPad users claim that because the iPad will shut itself off after remaining in direct sunlight for long enough, it fails to meet the promises Apple made about using the device as an e-book reader.

The group has filed a federal class-action lawsuit in the Northern California district to "redress and end this pattern of unlawful conduct."

When the iPad's operating temperature reaches a critical level, it will force itself to shut down and display a message warning the user to let the device cool down before trying use it again. This warning is the same that iPhones and iPod Touches give before shutting down when they overheat, often after being left in direct sunlight.

The lawsuit alleges that the iPad "does not live up to reasonable consumer's expectations created by Apple insofar as the iPad overheats so quickly under common weather conditions." Apple lists the iPad's operating temperature as 32° to 95° F (0° to 35° C), so it's not hard to see that using it out in the hot sun can quickly heat up the device over the maximum temperature.

The plaintiffs seem to take particular issue with Apple claiming that "reading on the iPad is just like reading a book." This claim is patently false, according to the lawsuit, because a real book can be used in "the sunlight or other normal environmental conditions" without shutting off.

Most consumer electronic devices can be damaged from overheating if used in direct sunlight for long periods of time; not all of them have the automatic shutoff capability that the iPad does. (Sadly, my boom box from 1986 didn't have an automatic shutoff, and my Quiet Riot tape melted all over the inside when I left it playing by the pool on a hot summer day.)

However, during my hours-long marathon "Plants vs Zombies" sessions -- both indoors and in the shade of an apartment deck on a sunny, 82° day -- my iPad never became even warm to the touch.

The iPad may not work "just like a book" at the beach or out in the hot sun. Does that fact truly make Apple guilty of fraud, negligent misrepresentation, deceptive advertising, unfair business practices, breach of express or implied warranty, intentional misrepresentation or unjust enrichment?

The plaintiffs are seeking class-action status and asking for an injunction against Apple's "false" promises as well as "real" and punitive damages.