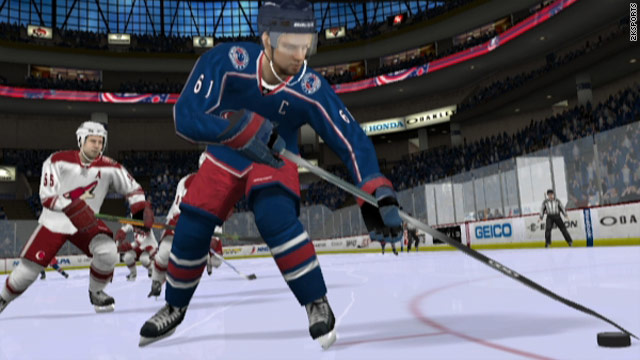 Will he really shoot or is he just faking it? Only your Wii remote controller knows.
STORY HIGHLIGHTS
RELATED TOPICS

(CNN) -- NHL2K11 (2KSports/Visual Concepts) tries to bring realism to sports on the Wii, but falls short because of control issues and a spotty artificial intelligence.

When developing their hockey game for the upcoming season, 2KSports decided to put all their eggs in one basket by only making a game for the Nintendo Wii and bypassing the Sony PS3 and Microsoft Xbox 360 consoles.

By utilizing the Wii Remote controller and the Wii Motion Plus attachment, 2KSports hoped to introduce a more true-to-life feel in the game play.

The game boasts real-time puck handing, poke checks and even juggling moves. While the fancy moves are attainable with the Wii Motion Plus, it is the basic moves where the games fall short.

Simply trying to shoot the puck is a hit or miss proposition since the controller movement (a flick upward) doesn't always work when you need it to. One-timer shots connect with power, but can sometimes be swing-and-a-miss attempts as well -- not what you'd expect from NHL style players.

The Wii nunchuck controller works well to move the players on the ice and is also utilized with the Wii Remote during hockey fights. And who doesn't like a good hockey fight?

Using the Classic Controller to play fixes a lot of the shooting issues, but loses the player's puck handling and juggling abilities.

It also seems to take away the reason for making it a Wii-exclusive title by getting away from the Wii Remote and into a more traditional controller.

The computer-controlled players also seem to have issues with positioning and spacing. Many times, they end up out of position or slow to react to puck movements, which seem to result in breakaways for the opposing team.

Refereeing is inconsistent. A minor collision can net a penalty call, while running a guy over when he doesn't have the puck is brushed aside.

Sure, that happens in NHL games, but these little things add up and detract from making the game feel truly realistic.

There are plenty of interesting features in the game, including the ability to replay the Winter Classic and an all-new Road to the Cup mode that pits Miis (personalized avatars for the Wii) against one another in competition.

There are also alternative jerseys, and each team has a full roster that allows players to set their own lineups.

The look of the game is great. Individual players appear realistic enough, right down to the slightly askew noses and missing teeth. The hockey rinks are well lit and loud, with appropriate fan noise for each arena.

But NHL2K11 falls short where it counts.

The gameplay isn't horrible, but spotty shooting abilities, a sluggish A.I. and a game that actually plays better when you don't use the controller it was designed for mean an average experience for a sport that's designed for speed and skill.

NHL2K11 is a Wii-exclusive title and is rated E 10+ for mild violence (unless your fighting skills are better than your shooting skills).