iPad competitors are lining up 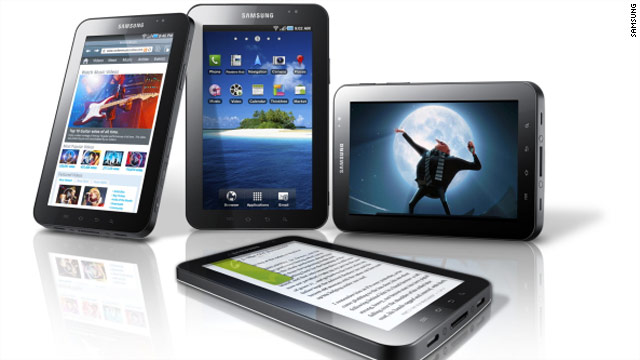 The big players in the developing tablet race are the same people tussling for consumers' dollars in the smartphone realm.
STORY HIGHLIGHTS
RELATED TOPICS

(CNET) -- Apple's iPad may finally have some competition.

With the gadget, Apple started the craze for building devices that are smaller than notebooks and bigger than standard smartphones, feature touch-screen interfaces, and enable people to browse the Web and download apps.

And the iPad took off quicker than most people anticipated, selling 3 million units in its first 80 days. The device is expected to keep tight hold of its market-leading position for at least the next year.

But beginning this fall (with several new devices launching at IFA Berlin last week) and stretching through next year (with the Consumer Electronics Show in early January), there are going to be far more consumer touch-screen tablets to choose from. And not just from small niche manufacturers.

Some of the world's largest makers of consumer electronics and PCs are jumping into the fray -- companies with the resources (including, in many cases, Google's rapidly proliferating Android operating system) to take on the Apple mobile-device juggernaut.

The big players in the developing tablet race will be familiar: they're many of the same people who are tussling for consumers' dollars and attention in the smartphone realm.

As with smartphones, choosing a touch-screen tablet will mean deciding between different operating systems: Apple's iOS, Google's Android, Palm's WebOS, Research In Motion's BlackBerry operating system, and Microsoft's Windows 7 -- except, in some instances, without having to also decide on a wireless carrier.

Here's a look at some of the iPad's competitors. It's not a comprehensive survey, of course. But it's a good look at the tablets coming from companies with the tech chops and marketing clout to compete with Apple.

The Samsung Galaxy Tab is emerging as a top rival to the iPad. Just officially unveiled at IFA Berlin, it's an Android-based touch-screen tablet. At 7 inches, it's smaller than the 9.7 inch iPad, and it's also lighter.

The initial reviews of using the tablet have been positive, and it's not an iPad clone. The specs include Android 2.2 (Froyo), Flash 10.1, 16GB or 32GB of memory, GPS, and a gyroscope, accelerometer, and a 3.2-megapixel camera, with autofocus and a flash. (See my colleague Stephen Shankland's hands-on video here.)

The biggest difference between the Galaxy Tab and the iPad is that you can buy the device only through a carrier. So, yes, that means there's a phone in the Galaxy Tab. Think of it like a smartphone on steroids, similar to Dell's slightly smaller Streak, which debuted this summer. The cost will be left up to the individual carriers.

The Toshiba Folio also debuted at IFA as an Android tablet ready to take on the iPad. As with Apple's tablet, you don't have to buy it through a wireless carrier, but you do have the option for WI-Fi only or Wi-Fi and 3G.

There's a 10.1-inch multitouch screen, an Nvidia Tegra processor, stereo speakers, a 1.3-megapixel Webcam, two USB ports, an SD card slot, an HDMI connector for sending video to other screens, Bluetooth communications, and 16GB of memory. Like the Galaxy Tab, it comes with Adobe Flash 10.1 and Android 2.2.

With the 5-inch Streak, Dell was one of the first major competitors of Apple to bring out a tablet using Android. The device is more of a phone than a tablet, but it's shown that Dell is being aggressive in getting out early in this category.

Though the Streak has been reviewed as a solid Android device, its software is already old; the gadget comes with Android 1.6 (whereas most new tablets will hit store shelves with version 2.2).

The Blackpad, a tablet from Research In Motion, is still a rumor, but it's a pretty solid one.

The maker of the BlackBerry is reportedly readying the device and intends it as a sort of companion gadget to the BlackBerry -- it will come only with Wi-Fi and Bluetooth connectivity options, and for 3G service would need to be tethered to one of RIM's smartphones.

Another report has the device not running the BlackBerry OS at all, instead featuring software from a company called QNX that RIM bought earlier this year. It's not clear whether this device will be ready for consumers this holiday season or sometime next year.

The HP Slate with Windows 7 is supposedly still being worked on by Hewlett-Packard, which announced the gadget at CES in January. While we're not holding our breath for that one, there's another potentially interesting touch-screen tablet coming our way from HP.

The company has been making PC tablets for years, but the reaction from customers to Apple's iPad must have clearly demonstrated the demand for a lightweight, non-Windows tablet.

A few months after the iPad's debut, HP went out and bought itself its own mobile operating system. Now it says it's planning to unveil a tablet based on Palm's WebOS sometime early next year.

Though very few details are known, the company has filed a trademark on the name PalmPad, which may or may not turn out to be the name of its impending tablet.

Apple's obviously not sitting still either.

While hardware updates are likely to come early next year, we also know there will be some significant software updates by November, as Steve Jobs showed us at the company's fall event last week. Wireless printing, AirPlay media streaming, and multitasking will arrive when iOS 4.2 is ready.