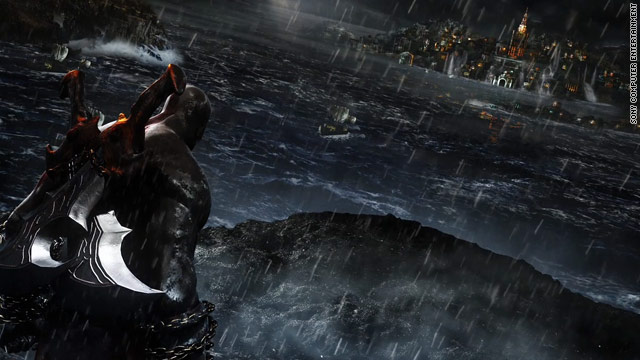 Editor's note: Scott Steinberg is the head of technology and video game consulting firm TechSavvy Global as well as the founder of GameExec magazine and Game Industry TV. The creator and host of online video series Game Theory, he frequently appears as an on-air technology analyst for ABC, CBS, NBC, FOX and CNN.

(CNN) -- It's worth applauding gaming's bold new directions into kinder, gentler topics such as food, fashion, art or photography -- as well as politics and pressing social concerns.

But let's be honest. Sometimes you just want to saw the tentacles off a slavering demon or invite a rampaging zombie to suck on your double-barreled shotgun.

That's where prototypical games for guys come in.

Maybe it's the Y chromosome. Perhaps it's having been raised on a generation of unapologetically macho and oh-so-gleefully politically incorrect films such as "Aliens," "Robocop" and anything starring California's current governor. (Let's not even go there when it comes to classic heavy metal bands and '80s prime-time TV.)

Here are five testosterone-drenched games that rub us the right way. Try not to drool as you shoo the wife out the door or tuck the kids in to sleep and race back to whipping up on the bad guys all in your man cave.

A strikingly violent side-scrolling beat-'em-up that draws equal inspiration from classics such as "Double Dragon" and the films of Robert "Machete" Rodriguez.

Stab, shoot or eviscerate legions of cartoon thugs, dogs and masked wrestlers in this laughably over-the-top downloadable outing. You can practically feel your brain cells melt away while you're playing.

Sci-fi run-n-gun action on an absurd scale, complete with jet packs, instant kills and an online multiplayer mode so extensive it'll keep you happily ignoring friends, relatives and significant others for weeks to come.

Ventilate squealing aliens, defend allies from being impaled on energy swords or demonstrate your prowess by collecting skulls as trophies. Needless to say, subtlety isn't a strong suit.

Whether wrenching undead warriors apart or painfully spearing massive bosses, this handheld gem of an action-adventure spells stress relief with each glorious geyser of spraying gore.

We know: Despite what you see on "South Park," women love playing this sprawling online fantasy saga just as much as closet barbarians.

But nothing says "screw it, I'm going dateless this year" quite like its latest add-on, which offers enough new areas and quests to keep any dashing knight's social calendar gridlocked for months. Hey, at least flying mounts don't get mad when you go three days without showering.

Spy a corpse shambling your way and squish it with any random object, from broom to sledgehammer, that comes to hand ... what could be better than that?

Grab a chainsaw-equipped kayak paddle and carve a trail of twitching limbs as you escape Fortune City's neon-tinted streets awash with dozens of drooling cadavers.

Deep, no. Disturbingly satisfying on some dark primal level, yes.