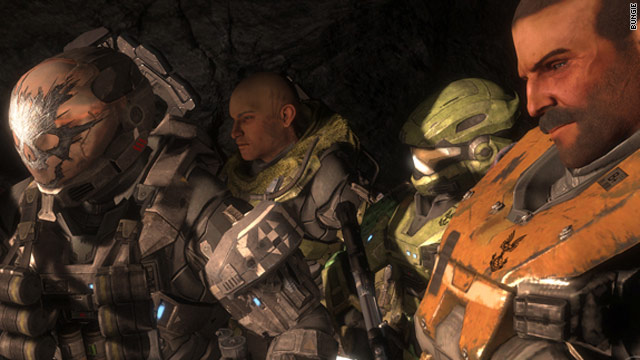 (CNN) -- "Halo: Reach" is a prequel that not only brings to a close the much-loved video-game series but also gives fans an outstanding solo story and new multiplayer options that make the farewell less painful.

Bungie, the developer of the series, has said that "Halo: Reach" will be its last game with the franchise. While it is unknown if another developer will pick up the plasma rifle, publisher Microsoft should be pleased with Bungie's swan song.

In 24 hours after its release this week, Microsoft said "Halo: Reach" earned more than $200 million -- making it the biggest entertainment release in the United States so far this year.

Its massive first-day sales puts "Halo: Reach" in the running to catch "Modern Warfare 2," which had a little more than $401 million in U.S. sales in its initial weekend in 2009.

"Halo: Reach" was definitely one of the most anticipated video-game releases of the year, based largely on the playable multiplayer demo available to those who bought the series' last installment, "Halo 3: ODST."

Players control Noble 6, a member of an elite squad of soldiers known as Spartans, and quickly find themselves trying to defend a planet from an oncoming invasion by the Covenant Empire -- a multispecies force of bad guys.

Along with the rest of the Noble team members, the player moves from one mission to another, uncovering the reason for the alien invasion and struggling to survive in increasingly dangerous scenarios.

The solo campaign is well thought out and tells the story from Noble 6's perspective.

Players will immediately identify and relate to the other Noble team members since they have distinct personalities that emerge during firefights and in between missions.

The tale of brutality and sacrifice winds its way through the forests of the planet Reach, into the cold expanse of outer space above and into deep caverns holding long-buried secrets.

While the thrill of blasting Covenant soldiers will be enough for some, the story pulls the player through 11 unique levels with enough story to keep it interesting without dragging through needless scenes.

Noble 6's armor is customizable, but doesn't add anything to game play other than looking good. There are armor packs found in the field that do the actual work and give the player additional and tools like sprinting, camouflage and jet packs.

Weapons will be familiar to Halo players, and ordinance packs are readily available. However, attempting to make a stand in the middle of a jungle might not be the best idea unless the player gets familiar with using alien weaponry as well.

The environments are beautifully rendered and majestic in their scope. Animation and effects seem lifelike, but nothing less would be expected from Bungie.

Vehicles handle like a go-cart with four different-size wheels. And whatever you do, don't let the AI (artificial intelligence) drive, because you'll never know how long it will take to get from point A to B, and trying to fire at enemies is really an exercise in futility as you lurch in the passenger seat.

Multiplayer action has been a staple of the Halo franchise, and "Halo: Reach" offers more choices for cooperative and competitive play than its predecessors.

Along with the familiar "Deathmatch" and "Capture the Flag" games, more objectives, scenarios and choices about how to play are available in the new multiplayer modes.

Players can place parameters on the type of teammates and opponents they want to battle with, or against.

"Firefight" teams up players in a game of survival as they face ever-increasing waves of enemies who also get stronger as the game progresses.

"Generator Defense" put teams of three against one another in a battle of attack and defense.

The "Invasion" scenario pits six against six in a fight for territory control.

Each mode is customizable and players can earn credits (which can also be earned in the solo campaign) that unlock features to change the look of Noble 6.

There are also challenges from Bungie that will help players improve their skills.

Despite all the in-game success, there have been a few glitches along the way.

Some players who rushed out to buy the game were getting a disc-read error, which Microsoft says it's addressing on a case-by-case basis.

The gaming site Kotaku also reported that the 4GB Xbox 360 Slim is not capable of online co-op play.

Apparently one of the requirements for online co-op is a HDD (hard disc drive) and the Slim's memory unit is not enough. The only recourse for those users is to purchase a Slim hard drive or a 250GB Xbox 360.

Despite those glitches, Bungie has definitely emptied its Halo basket of ideas and put together a fitting ending (or is it a beginning?) for a franchise that has thrilled millions of fans since 2001.

Great storytelling, awesome environments and an expanded co-op system should keep players awake into the wee hours defending humanity from the Covenant scourge.