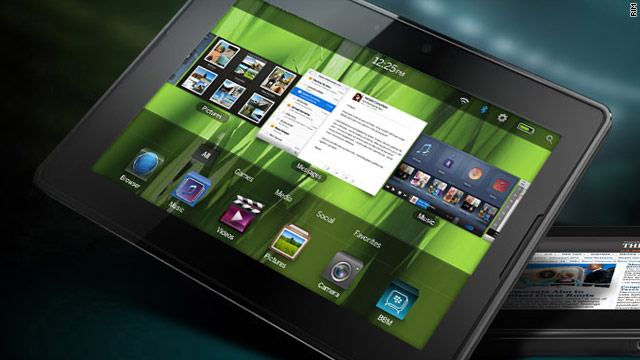 The newly unveiled Playbook has a 7-inch touch screen and is just under 10 millimeters thick.
STORY HIGHLIGHTS
RELATED TOPICS

San Francisco, California (CNET) -- RIM put the rest of the world on notice that it's not just a boring, yet eminently reliable, buttoned-up smartphone maker anymore.

As was widely rumored, RIM did unveil its first non-smartphone device Monday at the opening keynote event at its DevCon developer conference here. The company is calling it the PlayBook.

The PlayBook is aimed at people who do more work than play -- RIM's calling it "the first professional tablet" -- but the company is certainly not ignoring the world outside of the office.

In fact, even though RIM is playing very heavily to its reliable, core audience of enterprise users, it's still making some bold moves with a new operating system that enables all sorts of fun, mindless apps (in addition to productivity apps), as well as adding a few features that even the iPad doesn't have.

The PlayBook is due to hit the market some time early next year in the U.S., with international availability coming in the second quarter of 2011, but no specific date has been named.

It has a 7-inch touch screen, is just under 10 millimeters thick, has a front and back-facing camera for videoconferencing, a 1GHz dual-core chip, and 1GB RAM, 1080p high-definition video playback, Wi-Fi, and supports HTML5 and Flash-based video.

It's not clear how much internal storage will be available, but the prototypes shown at the event came in 16GB and 32GB varieties.

There are other big question marks that have yet to be answered too, such as how long the battery will last -- which is important for business use -- and when there will be an option to have a 3G or 4G data plan subscription. Right now the only way to get on the Web is over Wi-Fi or by wirelessly connecting to a BlackBerry using its cellular signal.

RIM Co-CEO Mike Lazaridis introduced the device (but did not actually demonstrate it working) at the beginning of his keynote address to developers. He emphasized how accessible the PlayBook will be to customers who already use a BlackBerry, describing the new device as "an amplified view of what's already on your BlackBerry."

He's smartly courting his built-in audience, who already either know and love their BlackBerry or are provided one by their company. The PlayBook is designed to fit right into the BlackBerry Enterprise Server, with no changes: No new software, security, server, or data plan is needed to use it.

There are 250,000 BlackBerry Enterprise servers already in use by businesses, according to RIM. So that should make the PlayBook appealing to companies that want to set their employees up with tablets but don't want to have to deal with configuring and securing a new device.

And RIM added some features that business types will find handy: there's HDMI video out, so you can show a presentation or a video at a meeting, and a front and rear-facing camera to enable videoconferencing.

But those things are not just appealing to business customers; regular folks, the kind who may want an iPad or an Android tablet, could find a use for them too.

In that way, RIM is making a play for potential Apple customers by adding features the iPad (which has become the industry's de facto standard for building a tablet) doesn't yet have. That includes HDMI out and cameras. (You can output video on the iPad, using an Apple VGA adapter, it's just not in HD.)

RIM didn't tread lightly when it came to another factor that distinguishes between the PlayBook and the iPad.

The PlayBook will display both HTML5 and Adobe Flash-based video on the Web. Apple has been very vocal about its distaste for mobile Flash, and has been a proponent of the emerging HTML5 Web standard.

To underscore how RIM feels about Flash, Lazaridis brought Adobe's CEO Shantanu Narayen up on stage today to talk about how closely the two platforms are linked. It was mostly for the benefit of the developers in the audience, but the idea that all Web video will be displayed is one way to differentiate its device for potential consumers.

RIM also showed that its strategy is not limited to just offering new hardware. Even though it only recently announced its new BlackBerry OS 6, the company has also created a brand-new tablet OS for the PlayBook. It's called BlackBerry Tablet OS, and it's designed by QNX Software, a company purchased by RIM earlier this year.

The company went with a new system because, as Lazaridis put it, "You don't build a skyscraper on a house foundation." RIM clearly feels that what it has for tablets is a much more robust OS that will run well on its 1GHz dual-core tablet.

While RIM emphasized how powerful the OS will be, the system also has something very non-businesslike built in: OpenGL support.

Developers use that to build games with cool 3D graphics. Dan Dodge, CEO of QNX, said that support will make the Tablet OS a serious gaming platform, which elicited applause from the developers in the audience.

Games are something Apple has keenly focused on with its App Store, and though they're not the main reason most people buy tablets, games do sell very well. So if RIM enables the PlayBook to be a way to sell games, that could encourage not only new developers but also new non-BlackBerry owners to check out the PlayBook.

Of course, there's still much we don't know: when it will ship, price, availability, and even some core features like battery life.

It's easy to connect the dots that the product is not quite ready, but that the company wanted to get its tablet out there before the expected crush of tablet announcements expected later this year and early next year.

RIM had the spotlight today, and it used it to answer some questions about how the company intends to compete against the growing threat of Apple and Android in the smartphone space.

RIM successfully showed that the company has plenty of life left in it, and a vision beyond smartphones. And it's wisely choosing to build on its established, reliable base, while creating a way to reach non-BlackBerry users with a whole new device.