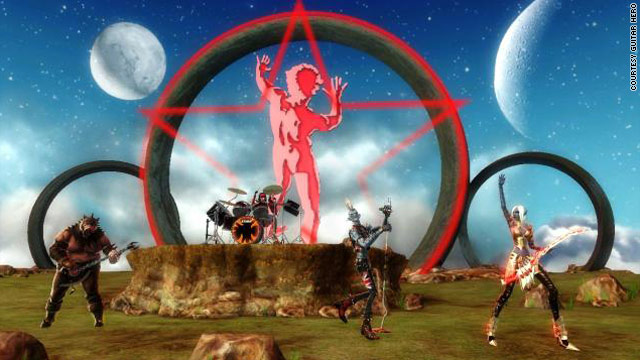 (CNN) -- In an otherworldly landscape, with controllers in hand, players must conquer the Beast in order to release a powerful demigod.

And with a playlist steeped in monster riffs and a quest mode that winds through scenes populated with the dungeons and dragons of fantasy lore, it might just expose heavy metal's darkest secret.

"The ultimate trick that musicians played on the world is that they were cool," said Brendon Small, whose band Dethklok (from his Adult Swim cartoon "Metalocalypse") lent the song "Bloodlines" to "Guitar Hero: Warriors of Rock."

The game, released September 28 and available on PS3, Wii and XBox360, likes Rush, too.

It includes all seven parts of the Canadian progressive rock band's "2112" suite and even weaves the legendary rockers into the fabric of the game.

The members of Rush worked on the "2112" game sequence, helping create in-game venues based on scenes from the liner notes of their original album.

The band gave suggestions for imagery and recorded voice-overs for the scenes, said Brian Bright, "Warriors of Rock" project leader for game creator Neversoft. He said the story of "2112" parallels the story in the game.

"The songs tell the story of a man who discovers a guitar, something he has never been exposed to, as the world he lives in is very Orwellian and controlling," Bright said. "In the game, the player is in search of the Demi-God's legendary guitar as it is the source of his power." 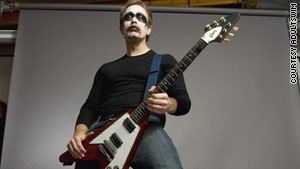 "Metalocalypse" creator Brendon Small writes and records music for the show and tours as a guitarist for Dethklok.

Small acknowledges that including 21 minutes worth of Rush on a game known for mainstream appeal is a nod toward rock's inner nerd.

"Absolutely!" he said. "Without a doubt, yeah! Oh man, but they picked the right Rush. That's certainly my favorite, and it's got amazing guitar moments, too."

It also has what Small calls the nerdiest thing of all in music: odd time signatures, which could mean difficult play in Warriors of Rock.

"When people start counting odd times like 7/4 instead of 4/4, [they're trying to] be different and make a new groove, and that is a nerdy, nerdy thing. But Rush gets away with it because they're good," said Small.

Neversoft worked closely with other artists to create the ultimate metal quest mode. Megadeth's Dave Mustaine -- whom Small considers one of the world's best rhythm guitarists -- wrote and recorded "Sudden Death" for the finale of the game.

"The game ends with an epic battle between the Demi-God of Rock and the Beast raging on an apocalyptic landscape, so we wanted a track that would completely shred," Bright said.

Additionally, Gene Simmons, the "demon" bassist of iconic rock band KISS, is the narrator of the game's quest mode and makes a cameo as the Demi-God of Rock.

Other musicians who metalheads and rock guitar enthusiasts are sure to geek out to include Steve Vai, Slayer, Metallica, Ozzy Osbourne and Anthrax.

Bright said "Warriors of Rock" songs were selected chiefly on their playability.

"A good song for 'Guitar Hero' would have a memorable riff but not feel repetitive. There would be a good amount of chord changes and, ideally, a fun guitar solo to add to the challenge," he said.

But being a good guitar player doesn't necessarily make you a good "Guitar Hero" player.

Mike Keneally, Small's bandmate in the live, touring version of Dethklok, said he thought Dethklok songs were easier to play on an actual guitar. "Bloodlines" is Dethklok's third song on a "Guitar Hero" game.

Small had to disagree with his friend. 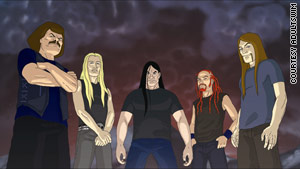 "I said, 'Nah, that's not true. There's 11-year-olds out there who can just shred through [Dethklok songs] "Thunderhorse" and "Laser-cannon Death Sentence." ' "

Those 11-year olds who play "Warriors of Rock" are about to discover some of the music that helped build Small's career as a musician and cartoon producer. Small's current cartoon project, "Metalocalypse," follows a fictional metal band, Dethklok, who have become so popular that they influence world economies.

"One of my favorite things about 'Guitar Hero' is you're turning a whole generation on to music that wouldn't, I think, have discovered it any other way," Small said.

"Because in order to know about metal, you've either got to have a cool older sibling or a dude down the street who just knows what's up. Some people don't have either of those things. Some people have a really uncool older sibling who listens to Brittney Spears or some kind of dance or club or trance, and they're never going to learn about cool guitar stuff or Van Halen or any of that stuff.

"But now that they have 'Guitar Hero' in their life, they can learn about Skynyrd. Foghat. Sabbath. Soundgarden."

A sad omission on "Guitar Hero's" part from its sixth offering, said Small, was that of lightening-fast guitarist Yngwie Malmsteen. Malmsteen, a Swedish guitarist, is known for his classical approach to metal music, as well as his fantasy-laden album covers and music videos.

"Yngwie, of course is the king. I love him. That should be on 'Guitar Hero,' because it would just be unplayable," Small said.

"He did [a video] with a wizard, a dragon and him in really high-waisted spandex pants and Sgt. Pepper's jacket flipping his Stratocaster around. Pretty awesome -- what rock 'n' roll is built for."