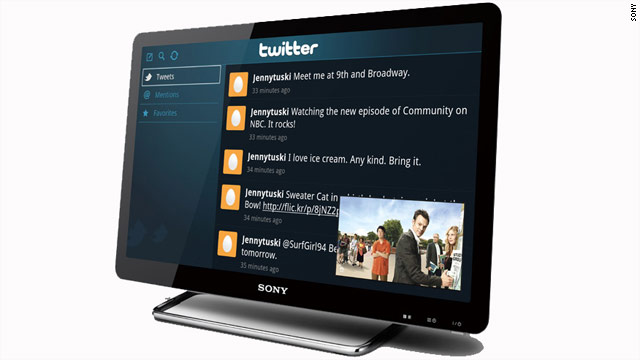 The big selling point of the new TVs is their inclusion of Google TV.

The Internet TV software brings Hulu, Twitter, Netflix, YouTube and Pandora to your living room screen, not to mention search capabilities and a myriad of Android apps.

Web surfing is powered by Google Chrome, while apps are powered by the Android OS. It integrates the web with your existing cable or satellite TV by making it simple to search your TV shows and your favorite websites at the same time.

The service was revealed earlier this year at Google I/O.

One of the more controversial parts of Sony's new Google TV-enabled devices is the remote, though.

It looks like a combination of a PlayStation 3 controller and a QWERTY keyboard, complete with dozens and dozens of buttons. In fact, Sony says some of the remote's design elements are borrowed from the PS3. Some people may love the extra functionality, but others might be turned off by all of the buttons.

The new TVs become available this Saturday on SonyStyle.com and in Best Buy stores nationwide this Sunday, making this weekend the first indicator of whether consumers are demanding TVs that can also surf the web.

Google desperately wants to dominate the living room screen and get people to use the web even more than they already do.

Whether consumers will pony up the extra cash for Google TV devices is a question we'll soon be able to answer.