'Medal of Honor' intense, but a few shots miss 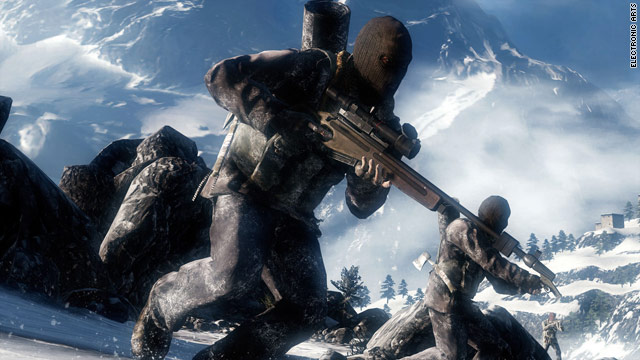 Development teams for "Medal of Honor" turned to current and ex-U.S. troops for a sense of realism in depicting the Afghan war.
STORY HIGHLIGHTS
RELATED TOPICS

(CNN) -- Despite the pre-release controversy over the inclusion of the Taliban, "Medal of Honor" (Danger Close, DICE, Electronic Arts) tries to tell a gripping tale of honor and sacrifice. But it doesn't quite get to the finish line.

"Medal of Honor" is a first-person shooter game taking place during the war in Afghanistan. It is a reboot of the series and is the first game not set during World War II

Players start off in the single-player campaign as a Tier One Operator, a special soldier with the tasks of the most dangerous, and often covert, assignments under the direction of the National Command Authority.

As the missions progress, players also will play as a U.S. Army Ranger and Apache helicopter gunner.

The storylines between the three different types of characters are interwoven so that transitioning from one to another is relatively seamless.

All are related to the ongoing conflict in Afghanistan and military efforts to remove and eliminate the Taliban fighters in the region.

The development teams included current and former military personnel to help achieve a sense of realism in the game. Weapons, environments, troop strengths and technology are replicated to help gamers get the feel of being in the battle zone.

Gameplay is fast-paced and sometimes frantic as firefights take place in villages and mountainous ranges. Mission objectives are clear, but how to get them completed often isn't.

Some missions also require hunkering down in a location to await rescue or extraction, just fighting off wave after wave of opponents.

Players will motor through the Afghan fields on an all-terrain vehicle before stopping to clear out an enemy area. Ranger missions are mostly designed as typical infantry battles, and Apache missions resemble bombing runs on opponent strongholds.

Each requires its own sense of touch and timing to get to the objective, and it may take a time or two before finding the right strategy to achieve mission victory.

Graphically, the game boasts wide terrain features representing the Afghan countryside and minute details such as etchings on the weapons and proper logos on clothing.

There were some instances when the graphics let down the sense of realism by leaving pieces of rock -- or slain enemies -- hanging in midair.

There were a couple of missions in which the entire scene was washed out (perhaps by a sandstorm or glare) and combatants were nearly invisible in rough terrain and could be spotted only after firing their weapons.

Frustratingly, the enemy shooters had no problem finding the U.S. troops trying to clear the field.

There were also instances when a battle would not end until the player hit a specific location, and magically, the enemy fled the battlefield. Until that spot was hit, opponents continued to respawn, giving no indication they were ready to concede the battle.

The single-player story was, at times, compelling, but ran into clichés such as generals sitting at a stateside desk, helicopters you know aren't going to make it back to base and an ending that probably had more to do with teaching a moral lesson than anything to do with the game.

Players are likely to be alternating between edge-of-their-seat excitement and slumping back on the couch in disbelief.

The multiplayer side garnered a lot of the early press for the inclusion of a playable Taliban. After getting feedback from military personnel and families, Electronic Arts decided to change the name from Taliban to Opposing Forces, but didn't change any of the weapons, uniforms or locations.

There are three different classes on each side to play during multiplayer -- rifleman, special ops and sniper. Each has its own weapons, strengths and weaknesses.

Players can level up by completing mission goals and stringing together "score chains" by shooting opponents or performing certain tasks. Leveling up unlocks new weapons and abilities that stay with the gamer from mission to mission, no matter which side they choose to play.

Up to 24 players -- 12-on-12 combat -- can be supported. Four different types of missions can be played across eight different maps. Combat usually involve each side converging and meeting somewhere in the middle of the map.

Multiplayer action is fun and exciting. Playing as a single class though the different missions really feels like an accomplishment as the score and rankings rise. But the variety offers enough different spice to keep playing the same maps enjoyable.

Overall, "Medal of Honor" attempts to show a realistic experience in the life of a modern-day soldier. Many of the elements are done well, but there are enough bugs to detract from the experience if you are dedicated first-person shooter.

However, if you are looking for an intense experience and are willing to overlook a few hiccups along the way, this game delivers a solid helping of heart-pounding, trigger-pulling action to keep you happy.

"Medal of Honor" is rated M for mature. It is available for the PC as well as the Xbox 360 and PlayStation 3 consoles.