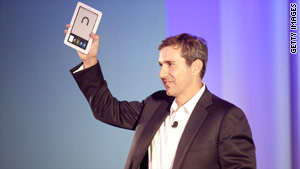 (CNN) -- Will Barnes & Noble fire the latest shot in the escalating e-reader battles with a color version of the Nook?

That was the major speculation Monday, a day before the bookseller was to hold what it was promoting as a major announcement.

Multiple tech blogs were reporting having gotten a brief peek at a page on the B&N website that appeared to promote a "Nook Color Film Screen Kit," presumably an accessory for the new gadget.

By mid-morning Monday, that link was no longer active.

On Friday, CNET cited an anonymous source saying the company will announce a full-color, touchscreen Nook that runs on Google's Android operating system.

The tipster, who CNET said has "proven reliable in the past," told the blog the Nook would have a 7-inch screen and sell for $249.

As noted on several blogs, Barnes & Noble appears to have registered the website nookcolor.com.

Launched last November, current versions of the Nook have a primary, black-and-white screen for reading text and a smaller color touchscreen for browsing through book titles. Prices range from $149 (Wi-Fi only) to $199 (Wi-Fi and 3G).

The speculated move could position the Nook at the forefront of an e-reader market that remains surprisingly robust just months after some analysts predicted Apple's iPad would squash interest in the electronic devices.

In June, both Amazon, makers of the Kindle, and Barnes & Noble,slashed prices on their readers in the wake of the iPad's debut.

The black-and-white Kindle got another price cut, down to $139 for its most basic, Wi-Fi model, and has reportedly seen strong sales -- even giving the Nook a miss and going straight after the iPad in a commercial last month.

Prices for the iPad, which went on sale in April, start at $499.