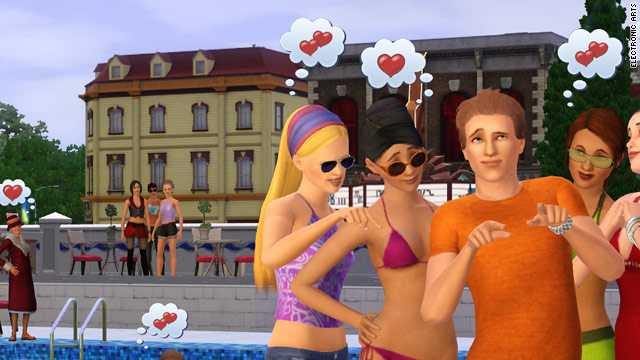 Sound like your day? Millions of people in 60 countries around the globe are doing the same thing in the world's most popular life-simulator franchise, "The Sims," and have been for the past 10 years.

The "Sims" franchise is celebrating its 10th anniversary this year with a new release, "The Sims 3," for the PlayStation 3, Xbox 360, Wii and Nintendo DS.

While it's the first "Sims" title for the PS3 and Xbox 360, PC players have been living, dying, growing and sharing in the Sims world through 39 different games and expansion packs.

The series, which allows players to live out virtual lives in whatever fashion they choose, has sold more than 125 million copies and has been translated into 22 different languages since its launch in February 2000.

The game was fairly simple and two-dimensional in the beginning, but it hooked into the imagination of players everywhere and became the best-selling PC game from 2000 to 2003.

Rod Humble, general manager of Electronic Arts Play Label, joined the franchise in 2004, shortly before "The Sims 2" was ready to hit the shelves.

He said an updated graphic engine to render the Sims world in 3-D was a big hit, but creators also added more things to do within the game's virtual world.

"Sims could age. We added wants and fears, which we didn't have in One," Humble said. "People came for the better-looking game and stayed for the far deeper gameplay."

Humble said it was a pretty dramatic shift for the franchise.

Not only was the game better looking; the audience changed from being predominately North American players to having European players outnumbering the Americans.

"It was a massive explosion in Europe," he said. "A lot of it was driven by Eastern Europe, where PCs were starting to come on board."

It was also a time when the franchise team began to notice that "The Sims" was having a cultural impact as well.

"The original art style of 'The Sims' was an idealized American suburbia," Humble said. "In Europe, [the game] is perceived as a cooler, inspirational brand because the setting is North America.

"If you live in Europe, the United States is quite a glamorous lifestyle."

The "Sims" team adapted to the cultural impact and now localizes content to go with the culture where the game is being sold.

Everything gets translated, Humble said, and the game is "very much owned by each country."

"We are the No. 1 game in Thailand, because we localize in Thai."

"The Sims" also began appearing in pop culture as well, being referenced in movies, television shows and music. TV skits about "The Sims" have appeared on "The Drew Carey Show," "30 Rock," and "One Tree Hill," to name a few.

The Black Eyed Peas, Nelly Furtado, Katy Perry, LeAnn Rimes and Depeche Mode have all recorded their hits in Simlish, the emoticon-filled language spoken by The Sims.

John Buchanan, vice president of marketing for the "Sims" franchise, said the musicians were fans of the game and wanted to do more.

Humble says he was "blown away" by one instance of "Sims" pop culture.

"A modern artist did a series of real-life events, and he did it in the style of 'The Sims,' " he said. "It was incredibly powerful because it was a real work of art, but he used the 'Sims' art style."

Jon Haddock, an Arizona artist and illustrator, created 20 images that captured real-life cultural events as they would have appeared in "The Sims" game.

His artwork included such scenes as the assassination of Dr. Martin Luther King Jr., Ted Kaczynski's cabin and the man standing in front of a tank in Tiananmen Square in 1989.

"I looked at these works of art and I was like, wow," Humble said. "There is a cultural relevance there that is really interesting."

As the "Sims" franchise continued to grow, so did its audience. A robust fan base has been feeding ideas and suggestions back to the developers as their needs and wants for the game have changed over the years.

"Our biggest demographic used to be teen girls," Humble said. "With 'The Sims 3,' we've seen that broaden a bit. It has aged upward, and clearly, it is a game that people are playing as they grow older."

Buchanan said he has been impressed by the excitement, passion and dedication of the fans in the two years he has spent with the franchise.

"More than 170 million pieces of content have been created and uploaded by our fans to be shared with players around the world."

The fans "truly want a high-quality experience," he said. "They want features that enable them to tell the story that they want to tell. This is an open-ended, life simulation game where the world and the stories you want to tell are in your own hands, your own imagination and your own creativity."

In 2009, the franchise continued to evolve and "The Sims 3" launched, allowing players to explore a world that was open and "real."

Humble said they expanded the simulation from individual households to entire towns and communities. So players could watch a neighbor move in, go through their lives and move away, and that neighbor would not entirely disappear from the game as in previous incarnations.

"We're extending the simulations from being hamsters in a cage where we're just simulating each individual person to extending that network across the entire town," Humble said. "I wanted this idea that you could bump into anybody in the 'Sims 3' world, and, not to be stalkerish, you could follow them home. You could see their life."

Humble said the move to the consoles finally happened after the developers felt the PS3 and the Xbox 360 had the power to run the full simulations. He said high-definition displays also allowed them to show the game information in ways they wanted to.

" 'The Sims' happens to be the most complex role-playing game out there in terms of systems and how hard it is to use," he said. "High-def consoles can now pull that off. They've got the horsepower to do it."

The brand-new world will contain additions systems, including karma powers and a challenge system to unlock new content. It will have more to do in the world than the PC version.

Players who have characters on the PC platform will have to start from scratch. Characters from the traditional PC game cannot be transferred to the new console versions.

Humble said he is interested to see how the game develops on the console because he expects it to be played in the living room instead of in the study.

"We've noticed that people play 'The Sims' differently if they don't think someone is looking over their shoulder," he said. "My hunch is there will be a lot more house building and creativity and funny moments because you'll want to show those off. And probably less deviant moments where you are having private fun because you don't want to show that off in the living room."

Despite the 10 years of success and growth, Humble and Buchanan said the franchise team will keep pushing the envelope on simulating real-life experiences in the virtual world.

"It is a very odd game that, to this day, I don't think anybody would green-light because it is a game you can't win, doesn't have any levels, there is no reward/risk for what you are doing and it is a game about your everyday life," Humble said.

"It is amazing that what really is a creativity tool that enables you to play stories sort of masquerading as a game has succeeded so much."