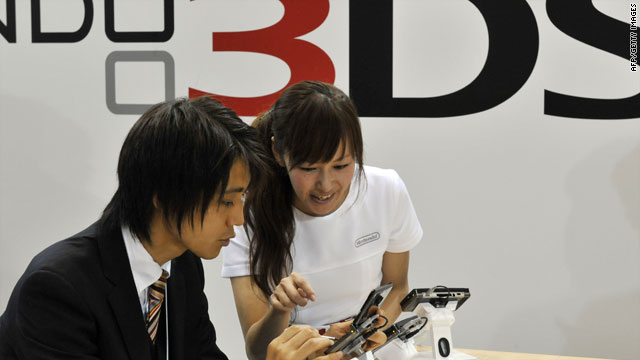 Will Nintendo's 3DS have trouble persuading gamers to buy in if it doesn't have 3G capability?
STORY HIGHLIGHTS
RELATED TOPICS

(CNN) -- Nintendo's 3DS wowed audiences at its unveiling this summer.

But without an always-on internet connection, the hand-held gaming device -- which displays 3-D images without the help of glasses -- could be at a disadvantage in the face of smartphones equipped for gaming.

An important social feature of the 3DS, called SpotPass, lets players battle each other over the internet, comparing high scores and making the games more interactive. The problem? Players will need to be in the range of a Wi-Fi network. Otherwise, they only can use SpotPass with friends who are close by.

This may not sit well with U.S. consumers who are used to being able to play games with friends across town or on the other side of the world. Wi-Fi connections are not as common here as 3G networks, which many phones use to connect to the mobile Web.

Nintendo has traditionally been slow to adopt online gaming. In that area, its GameCube system lagged competitors at the time. But web features play a major role in how Wii owners use the system, and it has sold more units than any home console of the current generation.

Social networking sites were ablaze this week on rumors of a PlayStation phone in the works. A smartphone built for gaming seems to be an attractive concept, and Sony's Peter Dille agrees.

Nintendo says it doesn't want gamers to have to pay a subscription, which cellular operators typically require.

Near-ubiquitous access to the internet over a cellular connection could be more crucial to Americans than Japanese.

That could be due to cultural and territorial differences, as The Wall Street Journal points out. Japanese cities are more dense than most in the U.S., with a greater reliance on public transportation.

Sony is experiencing those struggles in translating the success of its PlayStation Portable in Japan to the U.S.

"Does everyone [in the U.S.] take trains to work?" Dille, Sony Entertainment of America's senior vice president of marketing, asked rhetorically at a conference Wednesday.

"If it's not connected" to a cellular network, he said of hand-held systems, "then it does sort of limit people."

Perhaps we'll eventually see a 3DS with a 3G chip, so that it can send and receive information over cellular networks. Japan's largest wireless carrier, NTT DoCoMo, said recently that it was in talks with video game makers about building that connectivity into their hardware.