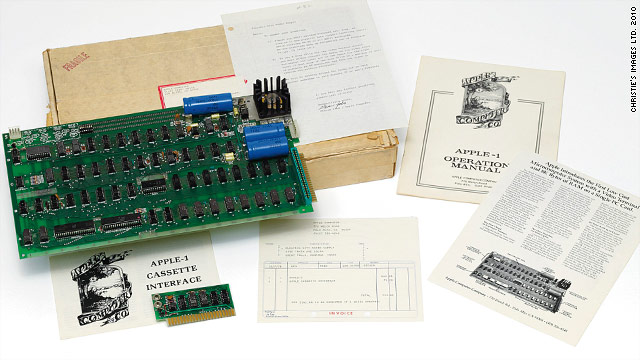 An original Apple-1 computer sold at auction for more than $200,000 on Tuesday.
STORY HIGHLIGHTS
RELATED TOPICS

The Apple-1 computer -- among the first made in a garage by Apple co-founders Steve Jobs and Steve Wozniak -- sold for about $213,600 at a Christie's auction held in London, England, on Tuesday, according to the company's website.

A private collector named Marco Boglione purchased the machine, according to the Associated Press. The Apple-1 computer came with a typed note from Jobs as well as a box stamped with the company's original logo -- an apple falling on Sir Isaac Newton.

The Apple-1 holds a place in tech history because it was easy enough for anyone to use (i.e., users didn't have to weld the motherboard together, as was the case with previous "home" computers, according to Christie's). It helped popularize at-home computing and led to the computer revolution.

Jobs and Wozniak built the Apple-1 starting in 1976. Since then, the company has become one of the hottest producers of computers and gadgets on the market , with flagship products like the iPhone, iPad and iPod.

People at the auction in London used some of these devices to document the Apple-1's sale, the Associated Press story notes.

The AP also reported that Wozniak attended Tuesday's auction and added his own signed letter to the winning lot.

About 200 Apple-1 computers were produced, and they fetched substantially lower prices at earlier auctions.

Wired explains more on that: