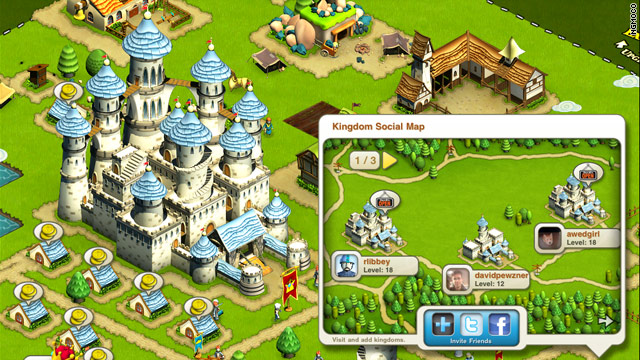 San Francisco, California (CNN) -- Do you really want your friends, family and co-workers knowing how many hours you spend tending to an imaginary farm on Facebook?

Presuming there's a market for a venue where gamers can connect anonymously, iPhone app developer Ngmoco is building a gaming-oriented social network for smartphones, the company told CNN.

Developers making games for Apple's iPhone and Google's Android platforms will be able to tie into the service, called Mobage -- pronounced "moe-bah-gay." The network is slated to launch sometime next year.

It will have competition. Facebook is ramping up efforts to expand its network capabilities to smartphones. Earlier this month, the Palo Alto, California, company launched a protocol for app developers to easily access the Facebook login information for someone using a phone with the new feature called "single sign-on."

While tapping into Facebook's 500 million users is an attractive goal for developers, some gamers may not want their leisure habits tied to real-life networks of friends. For example, Microsoft's and Sony's console gaming services don't require players to use a real name.

"Sometimes you don't want your friends and family knowing that you're playing these games every day," said Neil Young, CEO of Ngmoco, which is based in San Francisco, California.

Such a service for cell phones, called Mobage-town, already exists in Japan, and is among the largest social networks of any kind there, with more than 20 million users, according to reports. The platform is designed for games played on feature phones, which are less powerful than smartphones but can do more than feature phones available in the U.S.

"It's hard for people in the West to get their heads around how big it is in Japan," Young said. "What's happening in Japan is really a blueprint for what's going to happen here."

Not everyone thinks it was a good deal.

"I think they paid too much," said Anton Gauffin, CEO of mobile game developer Gamelion Studios. "Their model -- that free-to-play model -- already exists here with Facebook and app stores. I'm not sure if they'll offer anything new."

Ngmoco was working on the social-networking platform long before the acquisition. Incremental versions of that can be seen in some of its games that include the Plus+ network, a service that has 13.5 million users, Young said.

"Our vision with how to go forward with Ngmoco is exactly what Namba-san's vision was," Young said, referring to DeNA CEO Tomoko Namba's business plans.

DeNA is proving in Japan, as Zynga is doing in the U.S., that social gaming is a viable business. The Japanese company said in its last earnings report that it's on track to make more than $1 billion in revenue this year. That could put DeNA, as it notes in the report, "far ahead of Zynga and Facebook."

Mobage games are free to play, but the company makes money from ads and through the sale of virtual goods.

Ngmoco's planned service for smartphones is expected to operate similarly to Mobage-town. Players create an alias that can be used across all of the games that support the Mobage service.

On Android systems, Mobage will resemble an app store -- a central location for accessing Mobage-enabled games. On the iPhone, where creating a stand-alone store may violate Apple rules, Mobage's features will be built into each app. Eventually, the entire service may live on the Web, Namba said.

The success of Mobage is in its simplicity, Namba said.

"Users are not looking for complicated games," she told CNN. "Games used to be for hard-core gamers. I had never been a gamer before."

Zynga's apparent new mantra is to "convince you to take a 10-minute break," CEO Mark Pincus said an event recently. Zynga has persuaded 320 million people to do so, and the company recently expanded its reach beyond Facebook through a deal with Yahoo. DeNA partners with Yahoo in Japan.

Mobage-town is a "convergence between communications and games," Namba said. DeNA has expanded its footprint to other regions, with acquisitions and investments in China and major U.S. cities.

Ngmoco's piece brings that network to smartphones, and next year's launch aims to "globalize what DeNA has been able to do in Japan," Young said.

Translating that success to the U.S. market could be a challenge. Wanting to associate your real identity with online activity is a more popular cultural trend in America than it is in Japan, thanks in no small part to Facebook.

"People in Japan -- they don't use their real names or real pictures to communicate," Shinji Hirano, president of Japanese game giant Konami, told CNN. "Social networking in Japan or in another country is entirely different."

However, Young sees an area ripe for growth, and says game publishers agree. "Publishers see that the conditions here in the West are ready for Mobage to take off," Young said.

Despite hesitations, Hirano is among those believers.

"Bringing this kind of free-to-play model through the mobile, bringing it to the United States market -- it's an interesting challenge," he said. "It could have big potential."

Hirano is a believer in Apple's model for mobile gaming. Apple recently launched a social network for iPhone, iPod Touch and iPad apps called Game Center. As with Mobage, players can use nicknames, but the service is only compatible with Apple hardware, whereas Mobage will be available on Android in addition to those platforms.

To keep up with trends in social games, video-game companies will need to adapt to making games that update themselves "many times a day," Young said. Ngmoco releases updates frequently to keep players interested and ready to spend real money on virtual items.