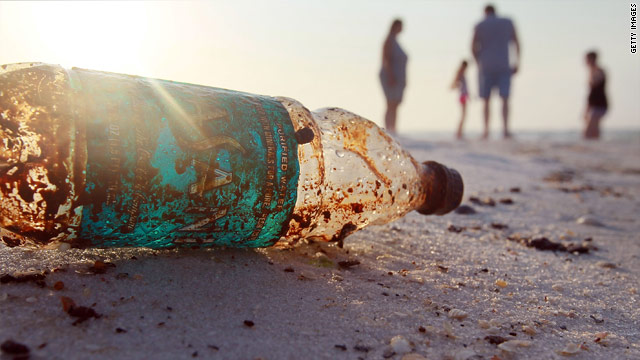 Marcus Eriksen is an environmentalist and co-founder of the 5 Gyres Project. Here he gives his view on how to clear the oceans of plastic waste.

(CNN) -- I stood on the shore in Waveland, Mississippi, pointing to the streams where I caught catfish and blue crabs when I was a kid.

My stepfather was a fisherman. I said to my wife, "There were houses here." My stepfather and the house are now gone, the neighborhood leveled by Hurricane Katrina.

Walking to the beach, blobs of rust-colored oil glisten from the Gulf spill. A confetti of torn bits of colored plastic, polystyrene and plastic pellets litter the space between them along the waters edge. It wasn't this way before. I haven't spent this much time here in 25 years. I've seen the baseline shift.

This is a tale of two oil spills. Plastic floating in the five sub-tropical gyres of the world, and the Gulf of Mexico oil spill, are two petroleum disasters.

From each barrel of oil 8 percent becomes plastic; 4 percent is the raw material, another 4 percent is the fuel to power the polymerization process. It is non-biodegradable and virtually lasts forever unless burned, yet we make products from it to be thrown away.

Plastic has been entering our seas for 50 years. The 5 Gyres Project has recently crossed the North Atlantic Gyre and Indian Ocean Gyre.

I've twice studied the North Pacific Gyre with Captain Charles Moore of the Algalita Marine Research Foundation. These oceans, and the fish that live there, are full of plastic, reduced to confetti, incessant from shore to shore, spread out like a spoonful of sand across a football field, over two-thirds of the Earth's surface.

You cannot clean up the gyres by going to the gyres. "Trying to clean up the Pacific gyre would bankrupt any country and kill wildlife in the nets as it went," Moore recently said.

It's much like smog in Los Angeles, a small particulate dispersed over a large area. Some had suggested putting filters on top of skyscrapers to filter air pollution from the clouds, but were met with laughter. People could see smog and recognize that treating the symptom was impractical, so we treated the source with better engines and catalytic converters inside mufflers. It worked. The smog lifted.

Going to the gyres with boats and barges capitalizes on the public's misconception that there are Texas-size islands of plastic. Though you may find a few tangled nets, buckets and bottle caps, there are no fabled islands of trash, only a thin soup of plastic.

You can't go and get the plastic in the five gyres, but you can wait for it to come to you. Hawaii, Oahu, Bermuda, the Azores, the Galapagos and Mauritius are natural nets sitting in the path of gyre currents.

In time, the five gyres will kick debris onto their shores, at low cost or no cost, low carbon footprint, and no death to marine life in the process. The plastic will leave the gyres as long as we stop adding more.

Long-term solutions will treat the source, not the symptom. Three steps will do it.

First, "Benign by Design" is a call to the producer to use green chemistry to change the material to be inert in the environment. New bioplastics, like PHA from Metabolix, looks, feels and acts like plastic, but is marine biodegradable.

Second, "cradle-to-cradle" is a call to manufactures to assume responsibility for the end game of what we make, building in a recovery plan for every widget. By extending producer responsibility to the full life-cycle, there is no concept of waste. Cradle-to-cradle is a call to the consumer to eliminate waste with smart consumer choices. Before you buy, think ahead to the lifecycle of the product and its package.

Third, "laws to level the playing field" is a call to law-makers and the public to give innovation a fighting chance against the embedded status quo. Many companies want to use alternative materials and design, but the bottom line is cost. Legislation creates fairness in the marketplace.

It is important that we remove the plastic waste that is washing ashore on islands in the gyres. But we must turn off the tap of waste flowing into our oceans. Our ocean, the land that washes down to her, and the people that earn their sustenance from the sea, deserve this change.