Working to bring 'Hippos,' and water, to Haiti 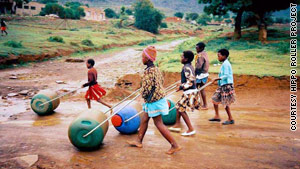 Girls help collect water in Africa, and the Hippo Water Roller cuts down on the number of trips they must make.

(CNN) -- Like so many people, Grant Gibbs watched the news unfolding in Haiti and thought to himself that he wanted to help the people of the earthquake-ravaged nation.

Unlike many, Gibbs is in a unique position to aid the Haitians in a big way.

Gibbs, a South African, is the man behind the Hippo Water Roller, a 90-liter plastic barrel with a sturdy handle that can be rolled on its side from a river or lake back to a home desperately in need of water.

But trying to send hundreds of barrels from South Africa to Haiti would be very expensive.

"Getting Hippo Rollers into Haiti would buy government a lot more time in terms of rebuilding proper infrastructure," Gibbs said by mobile phone from South Africa on Monday. "But paying shipping costs from South Africa would be prohibitive."

For that reason, Haiti may be a good place to try out Gibbs' new invention, a mobile Hippo Roller production plant set inside a used shipping container. The mobile plant costs $150,000 -- mostly for the tool that makes the plastic molds -- and can make 650 rollers a month, he said.

Two or three people could work the plant, he said.

Gibbs hopes to send mobile plants to Haiti and Uganda later this year, he said.

Hippo rollers have proved to be life-changing in Africa. By using them, poor villagers cut down on the number of trips to their water sources. Going for water is women's work, most African men think, so many young girls miss school to help their mothers make multiple trips to rivers or lakes, Gibbs said.

"We have enough money to buy them for about 100 households, but we could do with thousands," said Felicity Gibbs, national manager of Operation Hunger in South Africa. "I was in a village with a thousand households just last week, and though the government is planning to give them [a water pipeline], it won't be until 2014. So until then they will have to collect the water from the rivers [which are 3 miles away]."

The problem is financial. A Hippo Water Roller costs $100 plus shipping costs. That's a pretty steep price for a South African or for a charity that wants to buy a large amount. Most use donated money to buy them. In other cases, corporations will buy some and donate them to a nongovernmental organization or a village.

"We think nothing of turning on the tap and pouring a glass of water," Felicity Gibbs said. "These people don't have any of those kind of luxuries. Even with a Hippo Roller, a majority of the people still have to fetch water twice a day."

Grant Gibbs said shipping costs are high because his group is charged for the volume of air inside the barrels and not by the weight.

Gibbs and his organization have worked with Engineers Without Borders and Project H, a nonprofit design group, on a two-piece design that would allow for easier shipping. The design would increase by five-fold the number of products that could be put in one shipping van.

But Gibbs said real-world use showed that single-piece construction was crucial to withstanding the stresses placed on the drums while rolling heavy loads of water (a full Hippo carries about 200 pounds) on uneven surfaces.

Anne Torres, co-leader of the Engineers Without Borders team, said her team also brainstormed with Project H a way to use the cap of the Hippo to include a water filter.

Felicity Gibbs said that now, villagers pour a capful of household bleach into the water and the rolling action mixes the cleaner in the water, killing much of the bacteria.

Grant Gibbs laments the fact that he's never had the budget to market the Hippo Water Roller. But he's excited about some new projects, including the help of Global Change, a U.S.-based charity that tries to bring drinkable water to impoverished people by funding different projects. One of those projects would be getting a mobile plant to Haiti.

Gibbs said he stays busy trying to design improvements to the Hippo Roller. That includes the Hippo Hawker, a rack system that sets up as shelves for villagers to market their goods.

"They use it almost like a wheelbarrow," Felicity Gibbs said. "They put their fruits and vegetables [on the rack] and go into town where they set up a little stand."

Grant Gibbs said he also designed the rack to be able to carry a person to the doctor or infirmary.

But his immediate concern, he said, is getting the mobile labs out to nations that can really use the help.