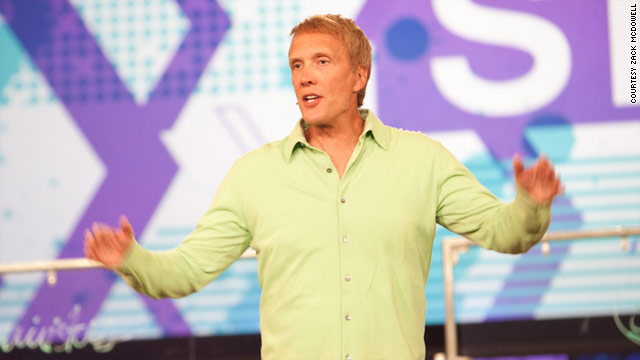 (CNN) -- The Sunday morning service at Fellowship Church in Dallas, Texas, was humming along with hymns and prayers when something unusual happened.

The lights in the sanctuary suddenly dimmed, and members of the church hushed as they peered at a pulpit shrouded in darkness. The parishioners then erupted in cheers and whistles as Ed Young Sr., the church's senior pastor, emerged from the darkness with a microphone in hand.

"Please be seated, be seated," Young said as he grabbed the Bible. "How are you guys doing today? Doing well?"

Young delivered his sermon, but he couldn't hear or see his congregation respond: He wasn't physically there.

Young's parishioners were instead looking at a high-def video image of their pastor beamed into their sanctuary from a "mother" church in Grapevine, Texas.

Young is part of a new generation of pastors who can be in two places at one time. They are using technology -- high-def videos, and even holograms -- to beam their Sunday morning sermons to remote "satellite" churches that belong to their congregation.

To read more stories with faith angles, go to the CNN Belief Blog

Spreading the gospel, or distorting it?

Young, whose congregation has about 20,000 members spread across five churches, said his image is so lifelike that some visitors forget he's not there.

"It's so real that people have come up after service to see me and [other] people are saying, 'Dude, he is on video,' '' he said.

It's a revolution. It's a very different way to spread the gospel.
-- Rev. Geoff Surratt

Geoff Surratt, author of "The Multi-site Church Revolution," said at least 3,000 churches nationwide use some variation of high-def video to spread their pastor's Sunday morning sermons.

A church can spend anywhere from $50,000 to $2 million on the high-def technology, he said. But the cost may be worth it because the technology allows churches to reach more people without constructing new buildings.

"It's a revolution," said Surratt, pastor at Seacoast Church in South Carolina, which broadcasts its pastor's Sunday sermons to 13 locations. "It's a very different way to spread the gospel."

It may not be a better way, though, said the Rev. Thomas Long, a nationally recognized authority on preaching and author of "Preaching from Memory to Hope."

Preachers who don't think they need to be physically present in their church should ask how they would feel if they were forced to preach to high-def images of their congregation every Sunday morning, said Long, Bandy Professor of Preaching at Emory University.

"There's something about embodiment -- that the person who delivers the sermon is actually there -- that's important," Long said. "It's important in the same way that someone physically visits someone in a hospital or buries a loved one -- they don't fax it in."

Long said the New Testament accounts of Jesus' interaction with people show him constantly touching and being physically present with people.

"We don't think God sent a message to us; God sent a person and the word became flesh," he said.

Young, the Texas pastor, also invoked the New Testament to support his method of preaching.

Young said Biblical church leaders like the Apostle Paul wrote letters that were then distributed to churches across the Roman Empire. The church leaders weren't physically present when those letters -- some of which were later included in the New Testament -- were read aloud, but that didn't make the message any less profound, he said.

"All we're doing is putting high definition, cool technology behind something that's as old as the New Testament," said Young, who also blogs, has a Facebook page and uses Twitter.

However, he said pastors must be careful not to be seduced by the "black hole" of technology.

"If you have a great purpose behind it, go for it," Young said. "But if you're just trying to be cool -- it has to have a theology and a meaning behind it."

Young said his church is often filled with so many people that even when members come to hear him preach in person, they have trouble seeing him. They end up looking at screens in the sanctuary.

"I don't think you lose a thing," Young said. "I would argue you could see me better when you're at a venue made for screens."

Why churches are becoming more visual

Dave Ronne, a pastor at a Georgia church that uses video technology, said contemporary churchgoers are accustomed to getting messages via screens because "we live in an audio-visual society."

Ronne is the pastor of redemptive art at 12 Stone Church in Lawrenceville, Georgia. He easily quotes scripture in one sentence, then talks about "building out the content and branding" for his church.

"We're all geared to watch screens now," Ronne said. "Everybody has a plasma TV or a flat screen at home. We're just leaning into where the culture is now."

It's important in the same way that someone physically visits someone in a hospital or buries a loved one -- they don't fax it in.
--Rev. Thomas Long
RELATED TOPICS

Broadcasting virtual Sunday morning sermons actually helps preachers become better pastors, Ronne said. Instead of preaching at three or four services each Sunday, they do one. That leaves them more time to get to know their congregation and their staff.

"Most pastors would just kill to have additional hours in the week to sit down and have a cup of coffee with someone," Ronne said.

The technical demands of beaming video to remote locations are not difficult, Ronne said.

The church's video team first captures a high-def image of the pastor's sermon on a QuickTime file. They then import that file to Final Cut Pro software before exporting the file to an external hard drive.

The final step is physically transporting the external hard drives to 12 Stone's remote church locations, Ronne said. The tech team takes two hard drives -- one for backup in case of emergency -- to the satellite churches belonging to the main congregation about a week before the next Sunday service to give the technical team time to work out any bugs.

"All of our multisite congregations are a week behind," Ronne said. "The sermons are delayed."

The process may sound impersonal, but churches that use high-def video technology say congregants don't have to lose touch with ministers. They hire other church pastors to serve their satellite locations by leading Sunday morning services and meeting with people afterward.

Those ministers simply exit the stage when it's time for the sermon and video screens to descend over the altar.

Mark Esposito, who has watched virtual sermons at a satellite church in Dallas, said he prefers watching sermons via video because it's more intimate.

Esposito is a member of Fellowship Church, where he has listened to Young preach for the last five years.

"I feel closer to the sermon than I would if I ever attended in person," Esposito said. "The screen is so big; it's almost lifelike. I would rather see Ed [Young] on the big screen than somewhere live."

Whatever one may think of it, the high-def video technology may be here to say, said Dan Reiland, executive pastor of 12 Stone Church. Reiland said that when he started as a pastor 28 years ago, technology wasn't important for a church's growth.

"The big cool deal was putting slides onto the screen behind worship songs," he said.

He said that many churches now know that it is critical to hire good technical and creative staff. These churches produce short films and stage skits shown during the service, he said. Some even have recording studios.

They also have a team of video editors, web designers and assorted creative people who know how to promote the church and make Sunday morning worship more appealing, he said.

"We have 120 volunteers that do nothing but sound, light and film every Sunday," Reiland said.

Some people may miss the days when they could go up to a pastor after a Sunday sermon and ask for a meeting. But pastors who have a gift for being accessible to their congregants will find a way to continue that, said Surratt, the author and pastor at Seacoast Church in South Carolina.

A pastor's ability to connect with a church doesn't ultimately depend on glossy video. It revolves around character, Surratt said.

"If you have a pastor that has challenges with ego and is disconnected [from his congregation]," he said, "he's going to be disconnected whether he has 100 people or 1,000 people."