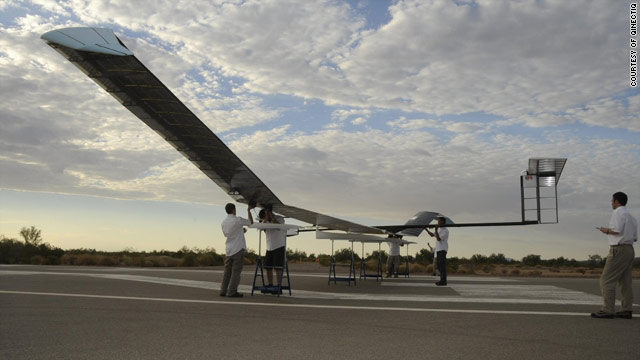 QinetiQ's "Zephyr" aircraft has been in the air for seven days smashing all previous records for unmanned flight.
STORY HIGHLIGHTS
RELATED TOPICS

The "Zephyr" plane, developed by UK defense technology company, QinetiQ, took off from the U.S. Army's Yuma Proving Ground in Arizona on July 9. Seven days on, it was still flying high.

Zephyr program director, Jon Saltmarsh told CNN: "It's extremely exciting. What we now have is an eternal plane. It has the same amount of fuel at the start of one day as it does at the start of another."

The aircraft has already doubled its own unofficial record of over 82 hours and smashed the previous world record for unmanned flight of 30 hours and 24 minutes, set in 2001 by U.S. aerospace company, Northrop Grumman's RQ-4A Global I.

The Zephyr project was conceived in 2001 and secured funding from the UK's Ministry of Defense (MOD) three years later. After several prototypes, Saltmarsh believes QinetiQ has now created an aircraft that demonstrates genuine military utility.

"It has the persistence to stay up there for long periods of time and it carries payloads that are doing things that the military will find useful."

Saltmarsh says its key role will be in aiding communications.

"Sitting at 60,000 feet it's ideal for getting a line of sight between two people in different valleys," Saltmarsh said. "But it could also carry surveillance payloads."

QinetiQ also says it will save the military money, performing many of the tasks currently carried out by manned aircraft.

Weighing just 53 kilograms (117 pounds), the plane has a wingspan of 22.5 meters (74 feet) and a wing area of around 30 square meters (323 square feet), the top side of which is covered in solar panels thinner than a sheet of paper.

The panels are rigged up to lithium-sulphur batteries which power the plane at night.

The company says that Zephyr will also find a civilian use helping communications in disaster relief situations, as well as forest fire monitoring.

"You can sit above a fire, with heat sensor technology and identify hotspots very quickly," Saltmarsh said.

Zephyr shows no sign of running out of power anytime soon, and Saltmarsh is hopeful it will stay in the air for another seven days, when the plane will finally return to Earth.