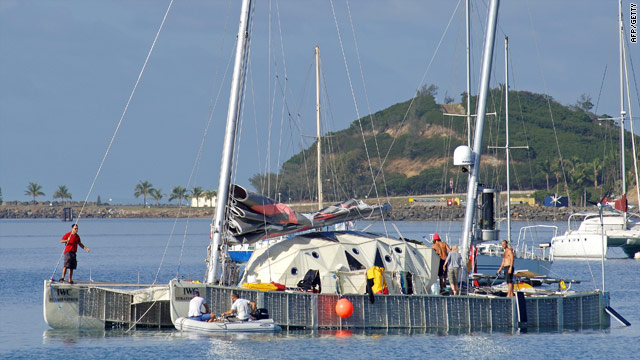 The Plastiki at Noumea, in the French Pacific Ocean territories of New Caledonia on July 7.
STORY HIGHLIGHTS

(CNN) -- Call it a "message in a bottle" or an epic eco-adventure -- but now after 8,000 nautical miles and nearly four months at sea, you can finally call it over.

After sailing through brutal southern storms and battling numerous technical challenges, the crew of "Plastiki" -- a ship made out of thousands of plastic bottles -- is now on its final leg of a trip across the Pacific Ocean.

The Plastiki will reach Sydney, its final destination, Monday morning -- ending a 125-day journey, but also completing years of planning and dedication for the team.

De Rothschild said that a 2006 United Nations report on plastic littering the world's oceans was his personal catalyst for action.

Video: Lessons learned from the Plastiki

Made of approximately 12,500 reclaimed plastic bottles and engineered using the most sustainable methods possible, the Plastiki is meant to be used as a platform upon which solutions to the myriad of environmental problems can be found.

"I was inspired to go out and really build Plastiki to showcase waste as a resource," said de Rothschild. "And here we are nearly four years to the day just pulling in to a little harbor just north of Sydney, ready to sail in tomorrow [Monday]."

The Plastiki's arrival in Sydney will not, however, be the 60-foot catamaran's first time to reach Australian soil.

Winter storms producing near-hurricane strength winds forced the vessel and its crew to take refuge in Mooloolaba, Queensland, on July 19.

Brutal winter storms in the Tasman Sea made the leg from New Caledonia the most challenging.

One night, winds gusting over 60 knots surprised the crew, leaving them battling to prevent the mast buckling and losing the sail for eight hours.

Co-skipper of the boat, Dave Thomson, called the waves some of "the biggest you're likely to see."

Once in Sydney, the Plastiki will be harbored at the Australian National Maritime Museum.

It will remain on display for a month as crew members hold special events aimed at raising awareness of plastic waste in the ocean. The general public will also have the opportunity to visit the vessel during an open day.

But de Rothschild said that although the boat is made of recyclable material, he's not planning to toss it in the chipper just yet.

"I really feel the Plastiki is entering its next chapter," said de Rothschild, outlining hopes to put the boat on display around the world.

"The plan is to create a global oceans exhibit that can showcase not only the issue of throw-away plastics but really about nurturing and re-evaluating our oceans... our most precious of ecosystems," he added. "The Plastiki is definitely not coming to a halt."