Your computer as an earthquake sensor 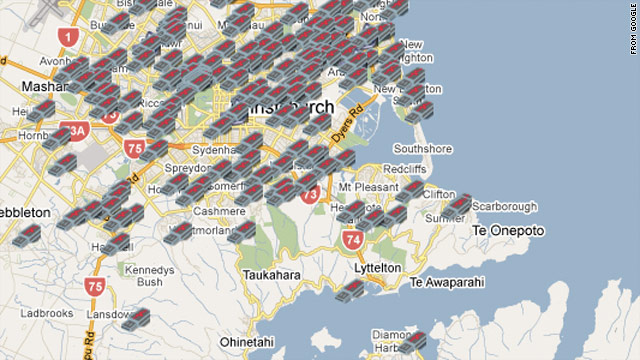 A group put sensors on computers in Christchurch, New Zealand, the site of a recent quake. Points on the map indicate sensors.
STORY HIGHLIGHTS
RELATED TOPICS

(CNN) -- The laptop that might be in front of you is an unused earthquake sensor.

If properly employed -- and connected to a large network of similar computers -- it could be used to map out the aftermath of an earthquake quickly, speeding up the work of emergency responders and potentially saving lives.

That's the vision put forth by tech researchers and scientists who are trying to "crowdsource" the detection of earthquakes.

"The world is just littered with data," said Bob Friedlander, an IBM "master inventor" who is has patented software to analyze seismic data collected by computer hard drives. "The hard part is figuring out what it can be used for."

Here's how the system works:

Many laptops these days are fitted with accelerometers, tiny motion-sensing devices that are used to tell the computer if it's being dropped and should protect itself before hitting the ground.

Those sensors also detect vibrations. And researchers from Stanford University and the University of California, Riverside, have linked more than 1,400 such sensors together as a way to gather data about how the earth is shaking.

Individually, these sensors don't tell scientists much about earthquakes. If one computer is shaking, the co-worker who just bumped your desk could be to blame. But in aggregate, these crowdsourcing scientists say, all of the data adds up to produce a clear picture of what's happened in a disaster.

That may not be as big of a deal in a place such as the San Francisco Bay Area in California, where the ground is planted with much more sensitive seismic instruments that are owned by the government.

But Elizabeth Cochran, an assistant professor of seismology at the University of California, Riverside, said these networks would prove especially valuable in countries that have virtually none of that expensive seismic equipment.

Cochran is a co-founder of the Quake-Catcher Network, which has deployed networks of computer sensors in Mexico, Colombia, Chile and, most recently, in Christchurch, New Zealand, where a 7.0-magnitude earthquake struck September 3. Cochran's aim there is to record aftershocks.

Some of the sensors used by the Quake-Shaker Network are already embedded in laptop computers; others are added via USB port to desktop computers that don't have the sensing equipment already.

Those add-ons are tiny -- about the size of two U.S. quarters -- and cost about $50, she said. Formal seismic equipment can cost from $5,000 to more than $10,000, she said, so these computer networks are much more affordable to countries that are starting from scratch.

"We've had a lot of interest from countries that really can't afford a lot of high-quality seismic stations," she said. "This is one way of getting some semblance of a seismic network going in their country without spending millions of dollars."

A desktop-computer sensor, installed in Chile, may be one of the only readings used to determine the exact location of a major February earthquake, Cochran said.

Ideally, she said, networks of thousands of sensors would be placed in large cities. The cost of such a project would be relatively low, she said, since so many laptops have the sensors built in, and since the desktop add-ons are cheap. Her group is investigating how to use smartphones as sensors, too.

Meanwhile, IBM recently patented software that could be used to analyze all of the data the vibrating computers produce.

Researchers said those calculations could be done in less than a minute.

There are doubts, however, that these crowdsourced systems will be able to provide data that is valuable to scientists -- an issue that is especially pressing in emergency situations such as an earthquake response.

Laptops and computer hard drives, on their own, are not capable of sensing and relaying useful information about an earthquake, said David Oppenheimer, a seismologist with the U.S. Geological Survey in California.

"I don't think there's any value in casually enlisting the public to install this software and expect to get any really useful seismological or structural data out of it," he said, adding that sensors need to be attached to the ground or to structural parts of a building to give the most useful readings.

The desktop computer sensors in the Quake-Catcher Network are attached to the ground, but laptops are not.

The IBM researchers intend for their system to supplement a national network of formal earthquake sensors. They say more data is always a good thing.

But Oppenheimer said the data from the computers would just clutter people's thinking in the aftermath of an earthquake.

Jim Kraemer, who also helped develop the IBM software, which has not been named or priced, said tapping into the data that already is out there in the world can only be a good thing. The formal sensing systems are important, he said, but there's power in information from the crowd.

Data is "flowing by in a stream," he said. "If we can just cup it out and use it, that's what we're looking to do."