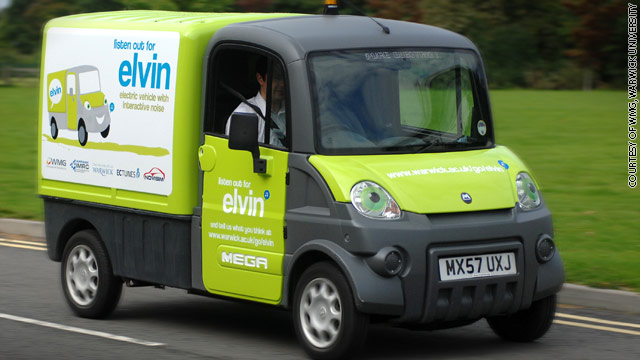 ELVIN is testing a variety of sounds which are designed to make electric cars safer in an urban environment.
STORY HIGHLIGHTS

London, England (CNN) -- They may be cleaner than their gas-guzzling cousins, but manufacturers are increasingly concerned that electric cars' near-silent motors could pose a problem for pedestrians navigating city streets.

The safety issue is spurring on UK researchers to test-drive a range of artificial sounds which could see the traditional sound of the combustion engine being replaced by the sound of, among other things, space invaders.

Using the audio engineering expertise of NoViSim and EC Tunes, WMG has created six separate sounds which have been programmed into the van.

People are then asked to give their opinions on the sound of the van as it travels around the university campus.

"Sound not only alerts people to the presence and direction of a vehicle, it also indicates the type of vehicle and whether it is stopping or accelerating," says Paul Jennings, head of automotive research at WMG.

The sounds for, say, a sports car, saloon or a city runaround will probably need to be different
--Paul Jennings, Warwick University, UK
RELATED TOPICS

Jennings anticipates that the sounds used for electric cars will be tailored to the type of model.

"The sounds for, say, a sports car, saloon or a city runaround will probably need to be different," Jennings says.

"But the crucial thing is that they need to be safe and environmentally friendly."

Furthermore, creating new sounds is also an opportunity for automakers to convey other messages, Jennings says.

"You can imagine that manufacturers would be very excited about doing something with sound that could be personalized."

Sounds, he says, enable manufacturers to "portray messages about the brand and quality," and "help form part of [the owner's] relationship with it."

Jennings and his team at WMG have worked closely with auto manufacturers for several years now, but mostly fine-tuning interior noise in prestige cars.

This project, Jennings says, is more of "a blank sheet of paper" which presents "a significant challenge."

The pilot study will be followed by a longer, more detailed, period of research, simulating electric car sounds alongside a range of other vehicles.

The prospect of thousands of silent electric vehicles hitting city streets is already occupying the minds of legislators on both sides of the Atlantic.

A bill -- "Pedestrian Safety Enhancement Act of 2009" -- is currently at committee stage in the U.S. Congress, examining if there is a need for minimum sound levels on motor vehicles. The European Union is also considering similar legislation.

Research coming out of North America is already flagging up safety issues with electric car noise, Jennings says. But until guidelines -- if any -- are set down in law, he says he can't be sure how electric cars may end up sounding.

It's still early days, but auto manufacturers are already looking to take the lead in what is predicted to be a highly lucrative market.

In Japan, Toyota has already begun selling a noise-making device which can be fitted to its best-selling hybrid Prius model. It also plans to sell the device, which emits a humming sound, in other markets including the U.S.