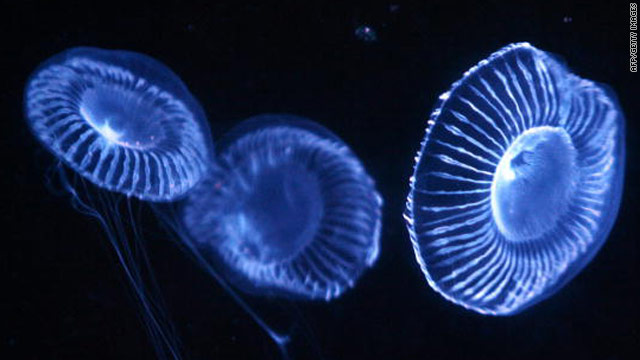 Glowing jellyfish are one source of the raw ingredients for a new solar cell.
STORY HIGHLIGHTS

(CNN) -- Putting thousands of jellyfish in a blender to make a smoothie sounds like the start of bad joke. In fact, it's one way to source ingredients for a new generation of solar power solutions that could aid medical science and offer cheap energy.

Scientists say by liquidizing the humble Aequorea victoria -- a glow-in-the-dark jellyfish commonly found off the western coast of North America -- they can use the green fluorescent protein (GFP) it contains to create miniature fuel cells.

These, say their creators, could be used to power microscopic "nanodevices" that could operate independently inside the human body, helping reverse blindness or fight tumors.

Nanotechnology -- the manipulation of matter at an atomic scale (one nanometer is equivalent to one billionth of a meter) -- is seen by many as the future of medicine, but the science of powering nano-machinery is still in its infancy.

Which is where the jellyfish come in.

Zackary Chiragwandi at Chalmers University of Technology in Gothenburg, Sweden told CNN he has developed a method of generating power at a nano-level by administration a droplet of jellyfish-type GFP onto aluminum electrodes and exposing it to ultraviolet light.

The biological fuels may be a means to independently power nanotechnology embedded in a living organism
--Zackary Chiragwandi, Chalmers University of Technology
RELATED TOPICS

The technique, he says, is more foolproof than existing light-powered cells, doing away with the need for expensive and tricky titanium elements found in "Gratzel cells" -- acclaimed solar-power fuel cells that mimic plant photosynthesis.

Chiragwandi says his cell can even utilize enzymes from fireflies and Renilla reniformis sea pansies to create its own light source, making it completely self-contained.

In Chiragwandi's "biophotovoltaic nanodevice," electrons flow through a circuit when light hits the green fluorescent protein. He says this generates a current measuring "tens of nano amperes."

The amount may seem negligible, but if scaled up would appear to offer a more efficient power supply than existing solar cells.

"The output characteristics of the biophotovoltaic nanodevice are comparable with those of earlier reported high efficiency solar cells," says Chiragwandi, adding that the power cells could be deployed within one or two years.

"The biological fuels may be a means to independently power nanotechnology embedded in a living organism, such as diagnostic, medical or even communication devices residing within a living organism without need for an external electrical power source," he says.

Meanwhile at the UK's University of Cambridge, scientists say they have worked out a way to turn living algae into what is effectively a floating biological solar cell that could be used to generate power from almost any non-freezing body of fresh or salt water.

Paolo Bombelli, who is part of the team developing the method, says it is possible to hack into the energy released by photosynthesizing organisms using specially-designed transparent electrodes.

By tapping into this process -- which sees water broken into oxygen, protons and electrons -- they have so far managed to generate enough electricity to run a digital clock.

"As we stand, we are not talking about a large amount of electricity," he told CNN, adding that the team were "quite far from a real application; definitely a long-term plan."

Although they have demonstrated that they could operate the technique on seawater in a broad temperature range -- thus opening up most of the world's oceans to potential use -- Bombelli says they have yet to exceed sunlight-to-electricity efficiency levels of 0.1 percent.

A major problem, he says, is working out "how we can push the system further without killing the organisms."

Although the algae might currently be at risk, for the jellyfish there is good news. Thanks to modern breakthroughs allowing scientists to grow their own green fluorescent protein using bacteria -- the unsuspecting sea creatures are no longer on the milkshake menu.