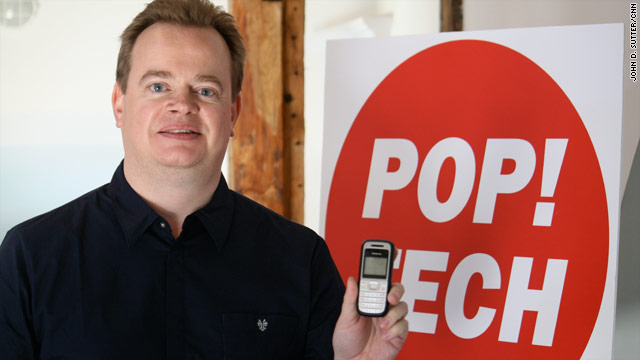 Nigel Waller is CEO of Movirtu, which promotes "cloud phones," private phone numbers that can be used on any cellular phone.
STORY HIGHLIGHTS
RELATED TOPICS

It didn't work. After much research, the cheapest phone he could make still cost about $20, only a dollar less than the cheapest on the market, he said.

If he wanted to bring cheaper cell phone service to the world's poor -- people who can't afford a $25 mobile handset, many of whom live on $1 a day -- he had to come up with a new idea.

His solution, the "cloud phone," is now being rolled out in Africa.

It costs 10 to 20 cents to activate. It basically lets groups of people share a single phone, while still maintaining individual phone numbers and private accounts.

CNN spoke with Waller, who is founder and CEO of a company called Movirtu Limited, after a lecture on Wednesday at the PopTech conference in Maine, an event focused on new ideas in technology that benefit society at large.

Waller: The cloud phone is an object that we at Movirtu invented.

There are over a billion people who do use mobile phone services today but do not own a mobile phone handset. So what they do is they borrow phones or they share a phone. They either share phones amongst a family unit or they'll go to a street corner and buy a single phone call from an entrepreneur sitting on that street corner.

CNN: So it's essentially a cloud phone number?

Waller: Well it's a number that gives you access to your own phone. So once you log in with your own number and a pin code you will get greeted with a menu. So it will say, "Hello, John. Your balance is $1. You have two missed calls. You've got one SMS message." And then we effectively set up a communication channel with the user, where we're asking them questions and then they're telling us what they want to do.

CNN: How much does this cost?

Waller: It costs the user anywhere from 10 to 20 cents to actually buy a phone number and then they're up and running. The call costs are the same as the existing prepaid tariffs that already exist on the prepaid network.

We are offering the technology to the mobile operators and we give them all the information and the marketing about how they can launch it to these people, and then we help them launch the service.

CNN: A person could use a SIM card to maintain their own number without a phone. Can you explain how the cloud phone is different from that?

Waller: The cheapest mobile phones that are out there are $20 to $25 a pop. Now, if you're on an income of $2 a day, then that's six months' savings. OK, so the user then has the alternative to buy a SIM card. That's an identity, yeah? Your identity's on your SIM card [which is inserted into a phone to provide service] ... But they have difficulties finding a phone to put that SIM card in, because phones are very personal things. They don't like taking the phone apart, taking out the battery, putting in someone else's SIM, plugging in the battery, and putting it all together and turning it on. All your messages then get downloaded and stored in someone else's phone. All your calls are logged there. And these people specifically, living below the poverty line, want to lead very private lives.

Plus, there's just the impracticalities. It's very easy to lose that SIM card. For half the cost of a SIM card, somebody can have their own phone number, but they don't need to carry anything around.

Waller: There's no doubt that phones are getting cheaper. But there are three key components in every mobile phone today, which cost about $5 or $6. There's the display, the keyboard and there's the RF [radio frequency] chip. Despite the hundreds of millions of dollars of phones that are manufactured, they still don't seem to be able to reduce the price of those three key elements. You add up those elements and you've got $18 or whereabouts. You add $1 for the battery, $1 for the SIM-card holder and you've got $20, $25.

I'm sure there's going to be some new technology coming down the road that will attack one of those elements. There are cheap OLED displays that are coming out ... keyboards are getting cheaper. So we will see phone prices dropping, but I don't think they're going to drop down to the level of $2, for example. The willingness to pay for mobile phone in Mozambique, in Africa, is $2.

CNN: Why is access to a phone so important?

Waller: We estimate that by giving somebody a phone identity -- it doesn't necessarily mean they have a mobile phone themselves -- we can actually save them $5 a month in costs.

And also we can increase their earnings potential by about $6 a month, and that's through allowing them greater access to jobs. There is a lady that we know who is 17 in Kenya, and her whole family has one mobile handset and she's desperately trying to find a job. But the head of the family -- he has the mobile phone and he takes it with him. Whenever someone phones her for a job, he answers the phone and he doesn't know who it is or what it is. And she's actually giving up getting a job just because people can't contact her.

CNN: How many people have access to the cloud phone service now?

Waller: When I was here [at the PopTech conference] last year as a social innovation fellow, I made a big statement that we were going to hit a million subscribers within a year. We haven't hit a million. We're in thousands but not millions.

What we've found is it's taken a lot longer to roll out the technology than we thought. A lot of that has been the mobile operators, because we've had to show them the business models and about how they can actually make money out of these people, because ultimately they want to make a profit.

CNN: What's next for mobile phones in the developing world?

Waller: Battery technology is a big thing. People have big problems even when they can afford a mobile phone in terms of battery technology. People actually put charging cycles into their weekly lives. "On Monday I will walk for two hours to this village, I'll charge my phone, I'll talk to my friends while it's charging and then I'll walk two hours back." And then they do the same thing the following week. Battery technology will really help.