The modern tech CEO: Barefoot and 21 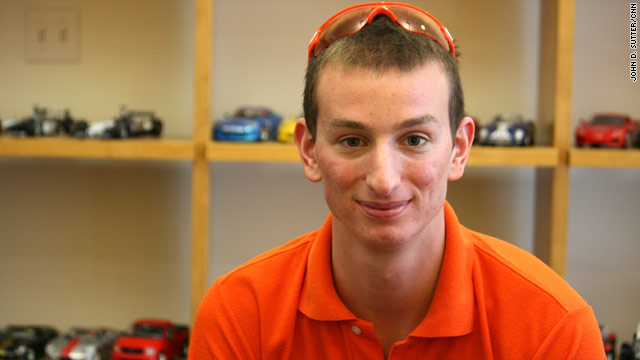 Seth Priebatsch, 21, dropped out of Princeton to spend more time working on SCVNGR, the company he founded.
STORY HIGHLIGHTS

Cambridge, Massachusetts (CNN) -- Walk into Seth Priebatsch's corner office and you have to step over a racecar mat -- the kind little kids use to race toy cars and crash them together.

The obstacle is no accident. Priebatsch, the 21-year-old founder of a smartphone app called SCVNGR, placed the mat there to make visitors wonder whether he pulls some of the dozens of model cars off his shelves and plays on the floor when no one's around.

He doesn't. But he wants to throw people off balance.

Is he really that young, visitors will wonder.

"I'm an engineer," he said, looking down at the mat, which was slightly askew so it would look like he'd been playing with the toy cars on his bookshelves. "I've got enough OCD to know things should be at right angles."

Priebatsch -- a likeable guy who talks in a slightly robotic voice and always has trademark orange sunglasses perched on his fuzzball head of hair -- seems to have learned something important about the topsy-turvy world of tech start-up companies: Youth matters.

In the age of Mark Zuckerberg, who co-founded Facebook at 19, it seems a dose of youth is almost necessary for success in a tech start-up.

What is SCVNGR?
SCVNGR (pronounced "scavenger", as in "scavenger hunt") is a smartphone app that aims to put "a game layer on top of the world."

To play, users create and complete challenges that are tied to certain locations. At a burrito restaurant in Boston, Massachusetts, for instance, users are asked to make an origami crane out of the tinfoil from their burrito.

Those who complete challenges get points. Those points are redeemable in thousands of locations for real products and gifts.

Big companies pay SCVNGR to add their businesses to the service. Smaller ones can add challenges free.

Users who earn a certain number of points can create challenges of their own.

Some challenges are simple -- asking people to "check in" to a location or take a photo of anything in a store.

Others are specific. One at SCVNGR's headquarters, for example, asks users to take a picture of an iguana that's hiding in a bamboo patch.

But is this archetype of the hyper-young, sweatshirt-and-sandal-wearing, dropout-turned-CEO starting to wear a little thin?

Or, in extreme cases like Priebatsch's (he founded a Web company at 12 and employed people in Russia and India to code for him), is there something about genuine youthful determination and endurance that promotes straight-out-of-the-womb innovation?

CNN spent a day with Priebatsch -- running with him near MIT and chatting about his life at SCVNGR's headquarters -- to try to find out.

A timeline view of his life helps make sense of his unique 21 years.

Seth's dad stood over him with a stopwatch.

Priebatsch's childhood was all about challenges and improvement. He took to running partly because his dad, a marathon runner, encouraged it, but also because it reinforced an axiom: If you try harder, you'll do better.

Seth grew to love that philosophy. And it's one that drives his app, SCVNGR, which aims to make real life more fun by infusing it with constant challenges.

At age 9, his dad upped the ante. Instead of running laps, he would teach his son to windsurf. And instead of offering lessons, Norman Priebatsch dropped Seth off, with a life jacket, in the center of the Charles River in Boston, as Seth remembers it. (Norman said he was always nearby in the water and keeping a close eye on Seth).

Seth said he panicked at first, but the lesson was a good one: He just had to try harder and he could make it work.

"Everything's possible as long as you're really working like hell to make it happen," he said in a recent interview.

It's an idea that a 5-year-old Seth also learned on a ski trip.

Seth's dad took him to the top of a black diamond run and skied down about 100 feet to wait for his unprepared son. Seth threw a fit, cursing up as much of a storm as a 5-year-old could muster. But then it clicked.

"He wasn't going to come get me," he said, "so at a certain point, you just start moving."

He started an online company called Giftopedia, a digital shopping list of sorts that automatically searched the internet for the world's best prices and made purchases for its users.

The only problem: Seth didn't really know how to write code for the site.

So, after searching the internet, reading up on outsourcing and talking with his parents, he hired workers in Russia and India to do the coding for him.

Because of the time difference, the preteen would wake up in the middle of the night to conduct online meetings with his employees. (This wasn't always enough: In one instance, Seth recalls abruptly leaving a middle school math class to take a business call on his laptop).

Seth always talked to his workers over IM or a shaky Skype voice connection.

He didn't want them to hear the little kid in his voice.

"You never let them know how old you are," he said.

Priebatsch was charging up the last hill.

He was losing the cross-county meet. Until his competition looked back.

"He turned back and gave me this look of, 'OK, this guy is so far back. I don't need to worry about it,' " he said. "I just sprinted the thing. It was one of the most exhilarating moments of my life."

He collapsed at the finish line and, as he tells it, took a nap because he was tired and bored. The race was what he cared about, not the win.

Since then, he's made a habit of saying "PLUS ONE!" to himself each time he passes a runner during a race. Usually he said it in his head, but it has slipped out of his mouth.

It's fun to think you're earning points for passing people, he said. It makes running into a real-life game.

Age 19: Dropping out of Princeton

It's a call most mothers would rather not get.

"My instinct honestly was to fall upon the ground and flail," Suzanne Priebatsch, Seth's mom, said of the Saturday afternoon when her son called to tell her he was dropping out of Princeton to start SCVNGR.

But then she listened to his pitch for the company. She was sold.

Seth is fond of saying SCVNGR is "a game layer on top of the world."

The last 10 years were about social media online, he said. Sites like Facebook and Twitter rule this space. The next 10 years will be "the decade of the game," he said, and companies like SCVNGR are trying to build it as fast as possible.

After Seth won an entrepreneur contest at Princeton, investors started calling him about SCVNGR. Peter Bell, from the firm Highland Capital Partners, which gave Seth $730,000 in December 2008, first noticed two things about the surprisingly mature 19-year-old who entered his office: He wasn't wearing shoes and he sat on the back of the chair instead of in the seat.

But as the two talked, Bell said he realized something else:

Seth was wise for 19 -- having already run two companies (He founded the second during high school and put those profits into SCVNGR). And he had the youth factor, something that's important for tech CEOs these days for several practical reasons, he said.

Part of it is the image. People have come to expect young tech CEOs like Zuckerberg and others. But it's also the lifestyle and dedication. Young people often are willing to give everything to a new company, because they aren't as committed to family and kids.

Plus, they often come with the freshest ideas, he said.

"Seth -- basically -- he works, he jogs, he eats and sleeps," Bell said in a phone interview. "He doesn't do anything else.

"You could argue that's not healthy. But you get older and your kids have soccer games and you work with charities and those things make you a whole person. But there's something to be said for just putting the blinders on and being able to focus."

Seth seems to thrive on this lifestyle.

He lives in his office -- keeping a sleeping bag under his couch and sometimes staying at his parents' house, down the street, as a backup.

He works seven days a week. Runs every morning. He doesn't have any friends outside work and sees friendship in a light that he admits can seem "caustic" from the outside. But to him it's just utilitarian.

"It feels very ephemeral," he said of spending casual time with friends. "You go to see a movie with a friend and it's awesome for like two hours, but then it's over with -- that's it. Nothing has been produced from that."

Any time spent not working makes him uneasy.

"It's not so much guilt, it's more like fear, probably," he said. "Every second I'm not spending building SCVNGR is a second that someone else could spend building the game layer."

Age 21: Champagne on the shelf

Now age 21, Priebatsch is running full-force toward his goal of bringing app-based challenges and games to as many people as possible.

SCVNGR isn't a runaway success. It has 500,000 users (Facebook has 500 million, while mobile-app leader Foursquare is nearing 5 million) and at least $5 million in venture capital funding. The app went international on Tuesday, expanding into 70 countries on the back of Google Places, according to Mashable.

The 60-person company's sales executive (or "chief rock star" in SCVNGR-speak), Michael Hagan, said the app made more than $1 million last year, with most of that coming from big businesses that want to add challenges into the app as a way to attract repeat customers.

But Priebatsch -- whose business card says he is SCVNGR's "chief ninja" ("because people don't negotiate against ninjas") -- is in the place he wants to be. He's running for the goal, but hasn't caught it.

He's somewhat uncomfortable with the idea that he may actually get there.

On his 21st birthday, December 14, 2009, Priebatsch got $4 million in funding from Google Ventures, one of the most notable start-up financing groups in Silicon Valley.

He didn't stop to celebrate. He was still in race mode.

"We signed a bunch of paperwork and I was very excited about that, but then I sat in the office and did whatever I normally do," he said.

Which means he went back to work.

For the occasion, a co-worker gave Seth a bottle of champagne -- something he'd never tried. It sits on the shelf in his office, above the wall of toy cars.

It's never been opened.