Is this the first step toward a flying car? 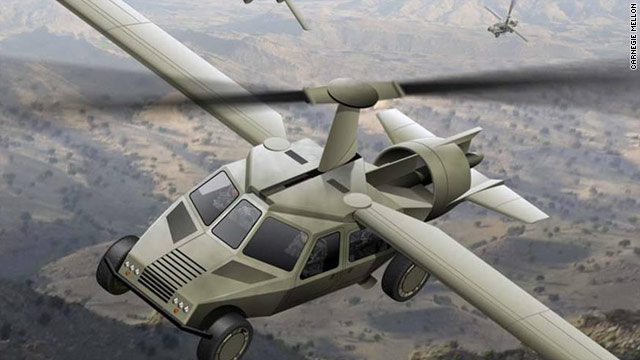 A concept rendering of the Transformer, a roadworthy vehicle that would carry four soldiers and take off like a helicopter.
STORY HIGHLIGHTS

(CNN) -- Along with the jetpack, the flying car tops the list of classic science-fiction imaginings that lead legions of fans to ask -- why don't we have this yet?

Now researchers, with some cash from the U.S. military, might be taking a step toward making these hovering vehicles -- seen in such diverse works as "Blade Runner" and "The Jetsons" -- a reality.

DARPA, the Defense Advanced Research Projects Agency, is awarding grants to scientists to help develop its Transformer program, which seeks to create a road-worthy vehicle that can take off vertically like a helicopter and fly.

This week, the robotics institute at Carnegie Mellon University was awarded a $988,000 contract to develop a flight system for the Transformer.

The institute has already worked on automated flying vehicles, which researchers say would be crucial to the success of a military craft that could go from an earthbound combat situation into the air seamlessly.

"The [Transformer] is all about flexibility of movement, and key to that concept is the idea that the vehicle could be operated by a soldier without pilot training," said Sanjiv Singh, a CMU research professor of robotics.

"In practical terms, that means the vehicle will need to be able to fly itself, or to fly with only minimal input from the operator. And this means that the vehicle has to be continuously aware of its environment and be able to automatically react in response to what it perceives."

Carnegie Mellon is one of six contractors DARPA has chosen for the Transformer, or TX, program. AAI Corp. and Lockheed Martin Co. were selected by DARPA to develop overall design concepts for the transforming vehicle.

DARPA frequently engages private-sector businesses and amateur technology buffs for for ideas on innovations that could be used on the battlefield and elsewhere.

Among them are a recurring robot race and a nationwide DARPA balloon hunt that awarded prizes to players who most efficiently used online networking to hunt down 10 weather balloons.

The vehicle DARPA is considering would be able to carry four troops and up to 1,000 pounds of equipment for 250 miles, either on land or through the air.

"Its enhanced mobility would increase survivability by making movements less predictable and would make the vehicle suitable for a wide variety of missions, such as scouting, resupply and medical evacuation," Carnegie Mellon said in a written release.

This isn't Carnegie Mellon's first outing with DARPA, or in the field of automated vehicles.

They've worked on a self-driving submarine, and earlier this year had an autonomous helicopter demonstration. The Carnegie Mellon contract is for 17 months.

that was certified by the FAA.