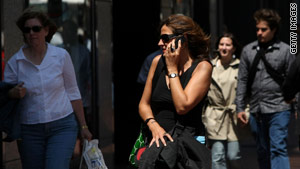 The city's board of supervisors voted 10-1 on Tuesday in favor of a law that would require handset makers to post in stores how much wireless radiation their phones give off, according to the San Francisco Chronicle.

Mayor Gavin Newsom is expected to sign the measure into law.

The city says consumers can use the information to differentiate between cell phones that emit relatively low and high levels of radiation.

Some researchers link those emissions to cancer and brain tumors, although there is no scientific consensus on the matter.

"It's information that's out there if you're willing to look hard enough," Tony Winnicker, a spokesman for the mayor, told the Times. "And we think that for the consumer for whom this is an area of concern, it ought to be easier to find."

The mobile phone industry opposes the new law, saying that science has shown cell phone radiation is not harmful to people.

"Rather than inform, the ordinance will potentially mislead consumers with point-of-sale requirements suggesting that some phones are 'safer' than others, based on radio frequency emissions," John Walls, a spokesman for the Cellular Telecommunications and Internet Association (CTIA), told The Chronicle.

A landmark study on the potential health effects of cell phone radiation found no conclusive evidence that the emissions are harmful or that they are safe.

The U.S. Federal Communications Commission says cell phones must not have a "specific absorption rate" of more than 1.6 watts per kilogram. That's a measure of "the amount of radio frequency energy absorbed by the body when using a mobile phone," according to the FCC.

Information about radio frequency emissions from cell phones already is available online. The San Francisco law would put that information in front of customers in stores and would require mobile phone retailers to provide additional safety-related information to consumers.