Mobile phones used to get past China's Internet censors 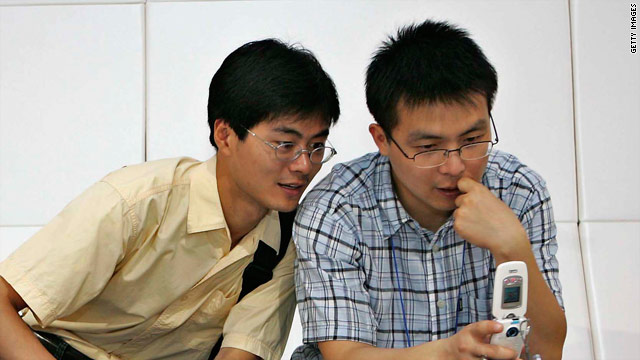 Content that might not be viewed on the normal Internet in China can be seen on mobile devices.
STORY HIGHLIGHTS

Beijing, China (CNN) -- The mobile web in China has loopholes where content could go under the radar of government censors, analysts say.

"It could be anything else the government normally frowns upon or does not consider healthy, which could be political content to pornographic content," said Mark Natkin, managing director of Beijing-based Marbridge Consulting, a market research and strategy consultant firm.

Mobile phones in China have not escaped government control. Last December, nine Chinese ministries initiated a campaign, which ended in March, to crackdown on pornography transmitted via mobile networks.

However there are signs that the mobile Web has holes, which some say could grow bigger as more people buy smart phones and third-generation networks become stronger. Out of China's 346 million netizens, as the country's Web users are known, 233 million use mobiles to access the Internet, according to government statistics.

The situation makes it much harder to regulate the mobile Web than the real Web.
--Li Qiang, Chinese Academy of Sciences

This presents a sort of "Catch-22" situation for the operators, which have invested billions of dollars in building out third-generation networks across the country as part of Beijing's plan to extend Internet access to the roughly 700 million who remain offline.

The operators have to monitor and block potentially sensitive content that could help to boost their bottom lines.

The regulations for mobile games are less restrictive than those on the Internet, according to Li. Some Web sites are also able to set up wireless application protocol, or WAP, sites, which can only be viewed on mobile phones, containing content that otherwise would be censored, he said.

All of a sudden the mobile carriers are involved in the process, and they have a specific commercial interest in the specific success of a site," said a Beijing-based telecom consultant who declined to be quoted by name.

"Now, we have carriers that are taking a very good cut from some of these revenues, so the Chinese commercial forces start to align their interests apart from the government from a censorship standpoint."

Just how far the operators are willing to align their interests away from those of regulators depends on the type of content subscribers demand on their phones, said Duncan Clark, head of BDA Connect, a Beijing-based telecoms consultancy.

Any content can be uploaded at any time. The mobile web is harder to control.
--Lu Gang, OpenWeb.Asia
RELATED TOPICS

From newspapers to television stations, state media outlets have been partnering with operators to produce content for mobiles. Yet, according to Clark, such traditional media content has been increasingly losing its audience share to new media content, including online video, which is more appealing to younger tech-savvy generations.

In other words, if Chinese don't want to watch CCTV, the country's national broadcaster, on their televisions, they aren't going to want to watch it on their mobile phones.

Either CCTV will have to create more compelling content or the operators are going to have to partner with new media content providers which, according to Clark, are harder to regulate.

"The challenge is more about how these carriers can get a take of what is happening across their network and how the television broadcasters can defend their positions," Clark said.

"The more they try to protect and have more traditional content, the more Chinese turn [them] off."

There are already signs operators are responding to the shift in media consumption. China Mobile, which, with more than 500 million subscribers, is the largest operator in the world, recently partnered with the online video portal Tudou.com.

Chinese netizens are also increasingly creating their own user-generated news, posting stories to microblogs, online bulletin boards and other Websites like Tudou. With the ability to quickly upload videos and other content to the Web via smart phones and faster connections, that impact could become greater as well as harder to manage.

"It should be harder for sure [to control]," said Lu Gang, co-founder of OpenWeb.Asia, a workgroup focusing on the Asian Internet industry. "Any content can be uploaded at any time. It must be harder."

Yet even with the possibilities for a more open mobile Web, there are clear signs why that optimism should be tempered, at best. An official white paper released last week on the country's Internet industry said that "authorities attach great importance to social conditions and public opinion as reflected on the Internet."

Yet, the document also clearly outlined its stance on censorship, including the use of telecommunication networks "to engage in activities that jeopardize state security, the public interest or the legitimate rights and interests of other people."

Just before the release of the white paper, Foursquare, which lets users alert friends to where they are through mobile phones, was blocked. The reasons for the ban remain unclear, however a number of users had been "checking in" from Tiananmen Square on June 4 to mark the anniversary of Beijing's brutal crackdown on demonstrators there.

"We have clearly arrived at that point where [the mobile Web] is becoming a much bigger concern, and they are putting more resources behind monitoring it," said Natkin.

"You can expect it to follow in much the same pattern that we have seen with the conventional Internet."