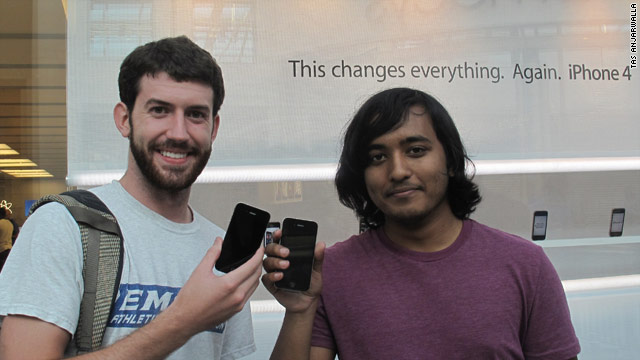 (CNN) -- Apple announced Monday the iPhone 4 sold more than 1.7 million units in the three days after its Thursday launch, far outstripping opening sales for previous generations of the phone.

"This is the most successful product launch in Apple's history," Apple CEO Steve Jobs said.

In the same time frame, sales for the iPhone 3GS last year hit 1 million. It took 74 days for the original iPhone to reach the million-sales mark.

The iPad reached 450,000 in sales five days after its release.

The iPhone 4 was rabidly anticipated by Apple fans for new features, including dual cameras that allow video-calling and a higher-resolution display screen.

But some of the luster of the strong opening was stripped last week by reports of spotty reception. Apple acknowledged users' reports of dropped calls and poor reception when holding the phone by its metal sides -- which hold the antenna.

A statement from Apple said signal interference is a problem with all mobile phones and suggested that users hold the phone differently or put it in a protective case, eliminating direct contact with the metal band.

Some Apple-centric websites and blogs were speculating that an update to address the issue may be on the way.

But an Apple spokeswoman said Monday morning that the company had nothing new to say on the problem.

There also were early reports of annoying yellow tint to the screen (some said that went away after time) and that the glass-backed phone was too easy to shatter.

But overall reviews of the phone's performance have been largely positive.