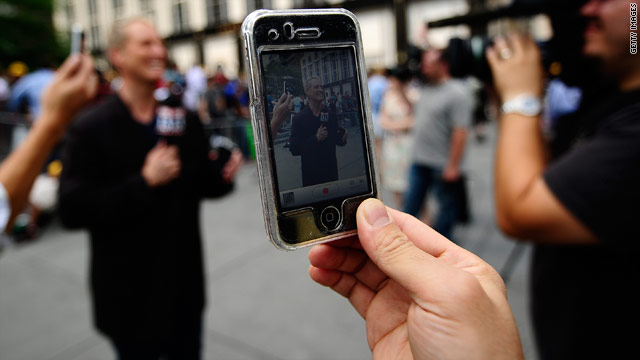 Apple knows the phone has problems but will insist that users are simply "holding it wrong," document suggests.
STORY HIGHLIGHTS

(Mashable) -- According to documents leaked to Boy Genius Report, AppleCare representatives are being given a strong company line to deliver to unhappy iPhone 4 owners who complain about reception issues.

Employees are told to say that the device's reception performance "is the best we have ever shipped" and that its critical antenna flaws are "a fact of life in the wireless world." They are told not to perform service on iPhones with these problems and instead to give customers a PR-driven recitative instead.

These statements are dead ringers for CEO Steve Jobs' own assertions that the iPhone 4 antenna and reception issues do not, in fact, exist. "There is no reception issue," he told one user.

But the very fact that this document exists suggests that Apple execs know there is indeed a widespread hardware flaw, even if they're unwilling to address it publicly at this time.

After users complained about iPhone 4 reception problems, Apple released a written statement last week saying, "Gripping any mobile phone will result in some attenuation of its antenna performance, with certain places being worse than others depending on the placement of the antennas."

An Apple spokesperson said Monday the company would have no further statements on the subject.

Apple did not immediately respond Thursday to an e-mail seeking comment on the leaked documents.

Outside the reality distortion field, on the other hand, Mashable and many other sites have been able to duplicate the issue being discussed: When held by its sides, which are composed of a metal antenna band, the phone's reception quality drops dramatically. iPhone owners in our newsroom have seen reception decrease from five to two bars simply from holding the phone with two points of contact between the owner's hand and the antenna band.

One law firm is even preparing for a class-action lawsuit against Apple and is soliciting iPhone 4 customers to contact them about reception issues.

Also, while some folks have reported that using a bumper case prevents contact with the antenna band and preserves reception quality, AppleCare reps are being told to not give bumper cases to disgruntled users.

Here's the full text of the document as reported:

1. Keep all of the positioning statements in the BN handy -- your tone when delivering this information is important.

b. Gripping almost any mobile phone in certain places will reduce its reception. This is true of the iPhone 4, the iPhone 3GS, and many other phones we have tested. It is a fact of life in the wireless world.

c. If you are experiencing this on your iPhone 3GS, avoid covering the bottom-right side with your hand.

d. If you are experiencing this on your iPhone 4, avoid covering the black strip in the lower-left corner of the metal band.

e. The use of a case or Bumper that is made out of rubber or plastic may improve wireless performance by keeping your hand from directly covering these areas.

2. Do not perform warranty service. Use the positioning above for any customer questions or concerns.

3. Don't forget YOU STILL NEED to probe and troubleshoot. If a customer calls about their reception while the phone is sitting on a table (not being held) it is not the metal band.

4. ONLY escalate if the issue exists when the phone is not held AND you cannot resolve it.

5. We ARE NOT appeasing customers with free bumpers -- DON'T promise a free bumper to customers.